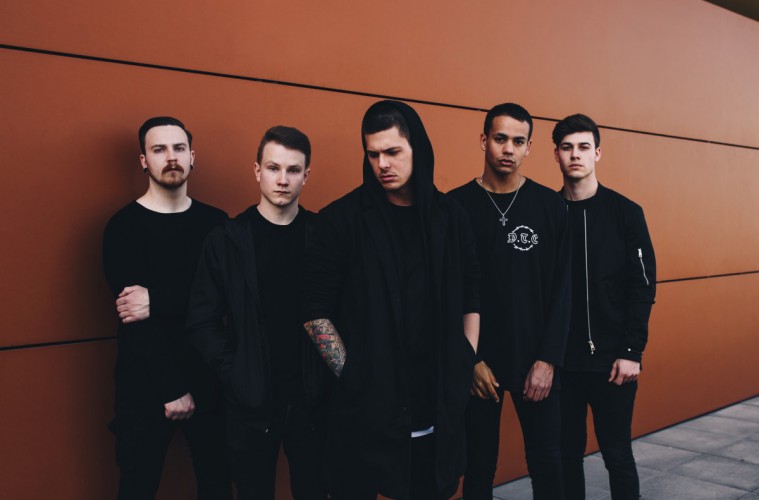 Since the downfall of previous moniker Burning Down Alaska, German metalcore outfit Alazka have grown to become one of the genre’s strongest names. Last week, the band stopped off at the Zappa in Antwerpen as part of their ongoing European tour with Polaris and The Plot in You. Maui Vindevogel sat down with vocalist Tobias Riche to discuss the tour, what sets them apart from the competition, and the German language.

How’s the European tour going so far?
It’s been amazing. We’ve had so many sold out shows on this tour, and also five or six shows in the UK. We just came back from the UK, and that was amazing as well. The tour has been great so far, and after the next four shows we go home.

You also toured Japan for the first time this year. What was that like as a German band?
It was also amazing. It was the first time that we’d ever played that far away from home. We did a bunch of European shows, but we never had the chance to fly somewhere and play that far from home. It was incredible, playing five shows out there. Every show was sold out, which is insane for a German band like us – who had never been to Japan – even if there were just 150 people per show. People went crazy; I’ve never seen such an intense crowd. The Japanese are also very nice, and it’s a beautiful country. We all want to go back there as soon as we can.

Did you learn any Japanese?
Nah. Just some bad swear words which I can’t remember anymore. Japanese is a difficult language, but I want to learn it because I met a guy there who is actually from Germany and travelled to Japan for work. He met his wife there and got married to this Japanese woman. He told me that Japanese is so hard, so I’m probably not even gonna try to learn it. I want to, though.

Last year, you changed your name from Burning Down Alaska to just Alazka. You thus still kept the final word. What’s the connection with Alaska?
The connection is really simple, as we are still the same band that we used to be, just with a different name. Honestly, we couldn’t identify with the old name anymore because I wasn’t even a member when the band was originally formed in 2011. It was just Marvin and our old drummer, Jason. We had member changes too, so it didn’t feel right to continue as Burning Down Alaska. We chose Alazka, and that wasn’t very different from our old name. We did this to show old fans that we’re still the same band, which is the connection.

The album Phoenix, also came out last year. How has the response been since then?
It’s been incredible! It’s our debut album, and it was the first time we’d ever been in a real studio. We recorded it in the UK for four weeks straight, so we were there for a month just recording and recording. The response has been great, and we’ve been able to do a bunch of tours with this album. The release tour itself was insane, and we still notice more people singing along to the lyrics with each time we play a song. It’s pretty cool.

So what separates Alazka from other metalcore and post-hardcore bands?
That’s a difficult one. I am in the band, so it would sound really weird to just say that people have to listen to find out.

Why would they have to check it out, though?
I mean, we’re just six random dudes from Germany who all have same passion for music. We also all have different influences. Our other vocalist, Kassim, is very much influenced by RnB, which contributes to our music. I really like rap music, and Kendrick Lamar is – like I said – my favourite artist. I love his lyrics and just his overall style. Marvin and Dario love modern rock and pop music, which also contributes. There’s a lot of other types of music which feature and that makes our songs special. It’s hard to tell, though.

So what’s next?
We’ll be doing a bunch of smaller festivals in Germany and around Europe. We’re also doing Nova Rock in Austria, which is one of the biggest, if not the biggest, festival of its kind in Austria. We played there last year too, and this time round we have a really good slot as we’re co-headlining a stage. As soon as we’re home we want to write more music and go on tour in November.

Final question: what’s your favourite German word?
I don’t know! I swear a lot. I always swear, so probably Scheiße because I’m always mad. Another of my favourite words is Kaffee, which is German for coffee. I love to drink that! So I’d say Scheiße and Kaffee. Phoenix is out now, and you can stream it below.