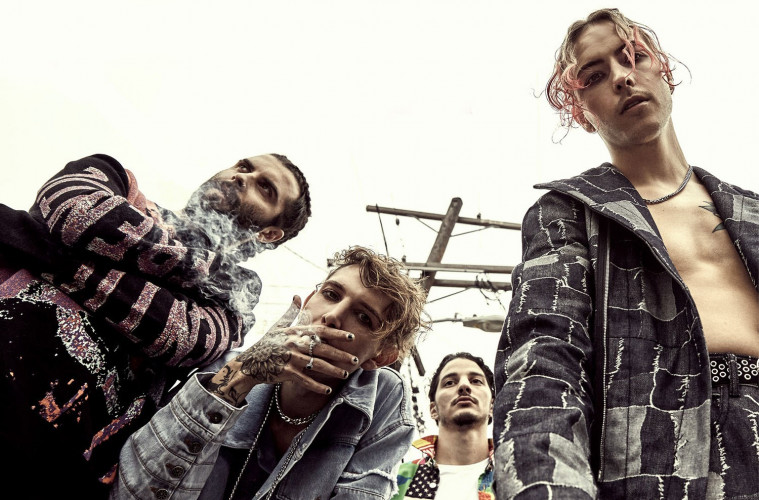 It hasn’t been an easy ride for The Hunna these last few years. From a tumultuous break with infamous conman-slash-manager Carl Hitchborn and his label to a powerful sonic reboot on new album I’d Rather Die Than Let You In – and via a pandemic which put another attempt at breaking America on hold – it’s safe to say that Ryan Potter and co. hadn’t had the smoothest career trajectory at times. Destined for the top, and complete with impressive streaming figures, The Hunna lead the way for a new wave of British rock. With I’d Rather Die Than Let You In a solid step forward for the band, Jack Parker called up guitarist Dan Dorney to discuss working with John Feldmann, getting involved with the likes of Josh Dun and Travis Barker, and how this album is the start of a fresh new chapter.

Hey Daniel. How have you been keeping busy during this pandemic? You had a lot planned, of course.
Oh man, it’s wild! We’ve been doing as much as a band could do. A lot of online stuff like live streams, Q&A’s, acoustic sessions on Instagram and performances for brands. We had to postpone our tour and album release, so that’s now come around quickly again. It’s crazy to think we’re still in this COVID-19 situation. Our tour from this year has been moved to April 2021, and in my head I think it’s going to be fine by April. But then the last time we postponed it I said the same thing, so I really hope it comes around quickly again.

April’s far away but it does still feel a little on the edge.
Yeah. We just wanna play shows! We did a COVID-friendly show in Newcastle at the Unity Arena, where everyone was all spaced out. It was quite a clever set-up. We got to play it with a great band called Jaws, and we were lucky because just after that new rules came in and the rest of the shows got cancelled.

How did that show feel?
It was kinda weird to be honest. Strange, as you’d expect. Our fans are wild, they crowdsurf and they break legs and shit. It was hard to get that connection as you would from your own shows, but everyone still had great fun! We watched some Instagram stories and tags and people were having drinks and singing along. If that’s all we can do for now then we’ll take it.

Your third album I’d Rather Die Than Let You In comes out tomorrow. You’ve been sitting on the record for a while, though, right?
We have indeed. We had to change the whole release strategy and make the record relate to the current situation. We decided to drop a new song each month instead of put loads of money behind three big singles, and it worked out much better. It was good to give fans something to listen to during a time of being stuck indoors.

This album feels like the start of a new chapter for you.
Yeah, we definitely wanted to change and evolve our sound.

John Feldmann played a big part in this I’m assuming. What did he bring to the table?
Ryan (Potter, vocals) and I went to Los Angeles and wrote lots of music with lots of different people. We’d never heard of John, but we were amazed by who he’d worked with. We started writing with him, and both our writing ethics were a perfect match. We developed a close relationship with him, and so we told our label in New York that we wanted to do the whole album with him. They were also the ones who set us up with him, and it was the stuff we’d written with him that we wanted to put on the record. We were very inspired by Bring Me the Horizon’s new stuff. We aren’t as heavy as they are but their combination of instruments and sounds really is the new sound of our generation. This is how rock should evolve! We explained that to Feldy. There’s a fine line between rock and electronic, and we wanted to sit in the middle of that, to keep that Hunna sound and evolve it ever so slightly. When we recorded the album, Feldy was incredible. He was like our Dad, we went surfing, he took us out for dinner and we went to haunted houses. Stuff like that. He brought a load of cool names in too, like Pete Wentz (Fall Out Boy) and Josh Dun (twenty one pilots). He helped write Dark Times, and Feldy also brought in Travis Barker. We also brought in Phem ourselves. The LA scene is so great, everyone bounces off each other so elegantly.

Josh Dun’s a big name to have on board.
He was so down to earth! He demoed some drums on the recorded which our drummer Jack then re-recorded himself. That same night, Feldy and Josh took us to The Forum in LA where Blink-182 were playing with Lil’ Wayne. It was so surreal; when we got backstage everyone was hanging out and we got to watch from sidestage. At one point Josh got onstage and drummed with Blink, and then Jason from FEVER 333 ran onstage too. It was like this whole circuit of friends, and it was nice for us to be braced with open arms.

It’s like one huge family.
Yeah, just like in hip hop where everyone’s looking out for each other.

So how did you benefit from working with Travis Barker, someone who is more than just an iconic drummer?
It was really simple to be honest. As you can imagine, he just jumped on the record and did it. He’s great, and when we hung out with him it was super chill. It was cool to have such a household name, and for our drummer Jack it was a dream come true. He couldn’t believe it. Travis inspires you to be the best person you can be.

For a British band like yourselves this album oozes – excuse the odd word choice – Americanness. Was this a shift in sound you’d always wanted to explore more?
Totally, yeah. We wanted to evolve our sound, and Feldy was the perfect person for it. Some songs were a bit tougher to get to the level they are now, because there’s definitely a line we don’t want to cross. It’s a change in the times, though. As we get older we’re listening to a whole variety of different music, and it’s very inspiring and exciting. We did two albums with the basics, just bass, guitar and drums, but there’s so many other things you can do. Synths, samples, drum pads, all that. You can hear a lot of trap elements which we thought would be really fun to mess with.

Were you not worried about alienating older fans with this new sound?
Nah, the times are changing. Those songs – She’s Casual, Bonfire – still exist and we’ll always play the old bangers live. We just want to do something different; it’s still rock, and it has that essence, but it’s just using different sounds. That’s why there’s that fine line which we didn’t want to cross. All the bands we love would be like, “that’s not the band we know”, but we still are that band. We’re just keeping it fresh, and I hope it goes down well.

These days a British band breaking through in the US seems a lot tougher. What do you think it takes for a band like yourselves – or anyone else – to take that leap?
I definitely feel like touring helps a lot. We have a fantastic label and great connection with our fans, but we’ve often had an unlucky stir with America. We have great tours and fans there, but whenever we’d put in the effort it didn’t happen. One time we toured there we sold out every show, but halfway through the tour we left our label and management. They booked it all and then cancelled the lot. Then we were there with Barns Courtney and the pandemic happened. We just want to succeed, work and grind. Once this is all over we have to bite the bullet and build again. You have to grind hard.

Of course the US is also so massive that something can do great in one state and terrible in the next.
It does feel like you’re going from country to country, but I love that. You always think America’s big, but when you tour there it really opens your eyes. It’s so diverse.

I just want to touch briefly on Carl Hitchborn. Without crossing any legal lines, what words of warning would you have for any new band to stop them from falling into the hands of bad management?
We’re free now, which is great. We got away from everything and we had to do what we did; it wasn’t an easy situation at the time but it’s definitely made us who we are now. A lot of the new record is about that situation; we channelled it into our music with Feldy. We’re glad that we got away from Carl, he still owes so many people so much money. He’s still doing stuff elsewhere, selling stuff. I try not think about people like him, but then you went in and you were honest. I love that. It’s up to bands and artists if they want to believe it or not, but there are people who prey on dreams. If you don’t read the facts and look stuff up, then it’s obvious what to do. It’s crazy. We’ve had people message us saying how great it is what he’s done for them, but then you’re like, “that’s not the case”. Just look it up. We can’t say too much still, but the proof is in the pudding. There’s enough out there for people to realise what they should or shouldn’t do.

The music world has been bit hard by the pandemic, but what can the industry learn from it?
I definitely feel sorry for a lot of my friends who work in the crew world; light guys, sound guys, et cetera. They’ve all had to get jobs which they don’t want to do. On the artist side of things there’s a lot which we can now do remotely. It’s very beneficial, as we can go and have these Zoom chats with fans. We’re able to connect to them more so than ever. Financially it’s been difficult for everyone, I don’t even know where to begin. No one could have predicted this, it’s the most random thing ever. The online stuff is definitely something good which has come out of it, though. Connecting with fans is great. I’d Rather Die Than Let You In is out tomorrow.