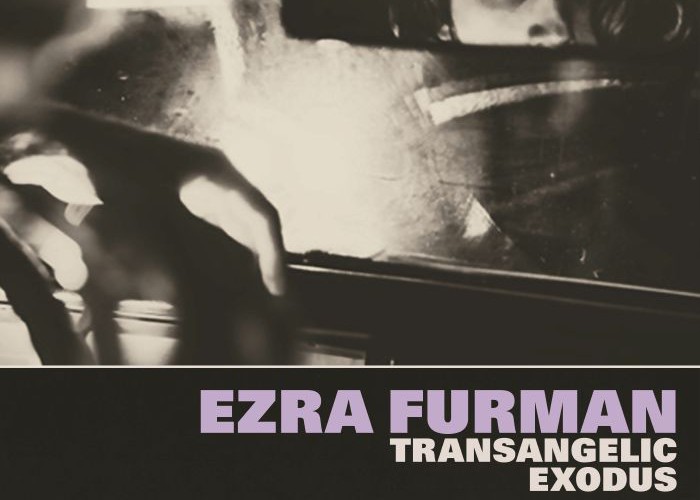 Transangelic Exodus is not a concept album, says Ezra Furman. No. He says it’s “almost a novel, or a cluster of stories on a theme, a combination of fiction and a half-true memoir. A personal companion for a paranoid road trip. A queer outlaw saga”. I get it, the reluctance to out-and-out call it a concept album. For many artists it signifies the point at which they’ve disappeared so far up their own arses that they’ve confused the tonsils for the testicles. That reflex cynical eyebrow raise that makes you wonder whether it’s the future soundtrack to some musical theatre piece is before you’ve even heard a note.

Ezra describes the concept behind the album as “I’m in love with an angel, and a government is after us, and we have to leave home because angels are illegal, as is harbouring angels. The term ‘transangelic’ refers to the fact people become angels because they grow wings. They have an operation, and they’re transformed. And it causes panic because some people think it’s contagious, or it should just be outlawed.” The allegory may be pretty heavy-handed, but in the current political climate, it’s a subject that’s deep in the public consciousness.

After the relative shocked reaction that Driving Down To L.A. caused as the first track to be released from the album, the other two advance tracks happened to be the most straightforward on the album. Whether this was always the plan, or an attempt to play it safe after giving an indication of what was to come, we’ll never know. The most recent of those tracks, Suck The Blood From My Wound, also happens to open the album, easing you in gently. It’s a pleasant enough synth-pop ditty centred around a reedy synth lick which gets its bite from Ezra’s jarringly intense vocal delivery. It’s a gentle introduction into the cinematic narrative that links the lyrical themes that are to intwine the themes of the entire album. It’s only when the ending fizzles into out into a fuzz of white noise and haunting sounds as Ezra starts screaming “A plague on both your houses” with a throat-shredding intensity that we realise that things are about to start getting weird.

Driving Down To L.A. immediately follows, its clean arpeggiating guitar lick betraying the monster sized chorus that’s just around the corner. It’s a shock to hear such a monumental progression on first listen, the maximalism centred around a distorted bass guitar and Ezra’s voice once again rasping the chorus line above it. By the time the chorus swings through a second time, the instrumentation is more fleshed out and the glam stomp of it all becomes more apparent. There’s little time to dwell on the fact though, as it’s not long after this point that it fades out to nothing.

It’s in this song that many of the album’s key traits are encapsulated. The obtuse choice of sounds and instrumentation, the minimal rhythm section, the songs that finish before they begin and Ezra’s passionate voice holding it all together. It’s like Beck in a parallel universe, where he takes himself a little too seriously. As God Lifts Up The Lowly strips everything down to some gently played strings with Ezra’s tremolo soaked vocals as he takes some time to describe the angel who has stolen his heart with the wit and creative imagery that we’ve come to expect from Ezra. “My angel’s got eyes like a housing project, he was born inside a guitar”.

There’s a relentless impatience throughout this album that seems to take joy in confounding expectations. Take Come Here Get Away From Me for example. It starts with an echo-drenched drum beat which cuts out before the count in never to return. Straight after it progresses into the “digital content blues” whose slide guitar delta blues sounds like it’s soundtracking a western. Then suddenly, after a choral false start, a digital chorus that sounds like it could have been pulled from a song by The Notwist. If this song doesn’t feature in the next series of Westworld then they’ve missed a trick.

As you can imagine with this pinball approach, it’s more successful on some songs than others. No Place is an adrenaline-fuelled romp where everything just clicks. The pounding toms, the rasping trumpet, Ezra falling over himself to get the words out, it’s a massive rush. Maraschino-Red Dress $8.99 at Goodwill sounds like Gang Of Four and the best bits of Devo, simultaneously sounding just like and nothing like post-punk. There’s good reason Love You So Bad was chosen as one of the lead tracks, a great example of Ezra’s uncanny ability to create incredible earworms and make it sound effortless.

One of the biggest consequences of the high-concept, though, is that many of the tracks don’t stand up in their own right, working more in the context of the album than as something that could hold its own individually. Compulsive Liar ends before it begins, just as it starts to get interesting after the slow-burning introduction. From A Beach House feels more like a movement than a song, with a wandering progression that’s reminiscent of the aimlessness of the Fiery Furnaces.

Ezra was keen to point out that “the album still works without the backstory, though” when describing this album, and he’s sort of right. Outside of the instrumentation, a lot of these songs don’t have much in common with themselves, let alone showing cohesion as a whole body of work. This sort of album could have been a total disaster in the hands of a less talented songwriter, but none-the-less the album is an exhausting listen. It’s a tour-de-force, the sort of album that ends up being people’s most or least favourite. The sort of bold body of work which demands you form an opinion of it. Like it or not, you certainly can’t describe it as boring, and isn’t that what every artist should be striving for? Transangelic Exodus comes out on 9 February.