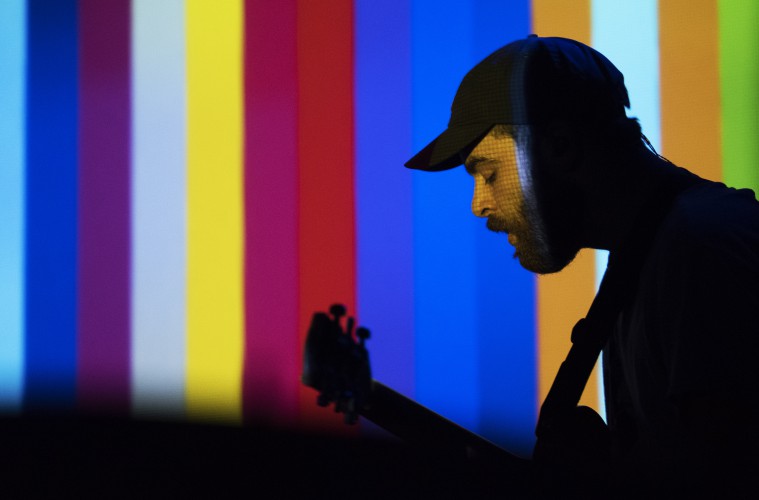 Last week, Leeds outfit Hookworms‘ put out their enthralling and all encapsulating new album Microshift. In support of the record, they’ve taken it out on the road across the length and breadth of Europe. Last night, the tour stopped off at Amsterdam’s relatively intimate Paradiso Noord, and guest writer Ed Ulrich went to find out if it was any good. Shali Blok provides visual accompaniment. Formerly a band whose previous work Pearl Mystic and The Hum would be well placed as the backing soundtrack to a forest ritual sacrifice, their newly jagged Kraftwerkish synths open into Negative Space, the stabbing introduction from acclaimed 2018 release Microshift. From here, the sense of momentum never ceases. The backing projected screen flashes hallucinatory CGI-scanned visuals of the bands’ torsos spinning, looping perpetually while their charged, reverberating musical mayhem first knocks you backwards then pulls you back in to join their trancelike state. While Microshift hits a slower gear a third-way through the album, onstage Hookworms don’t let up, stealing The Hum’s centrepiece track Radio Tokyo to grind us on through the surging first thirty minutes until the poppier, funkier Shortcomings and Opener intervene, giving the chance to breathe. Saxophonist Chris Duffin joins the band for the last segment to plunge us back into a spiraling hellscape, his sax a wonderfully screeching, cacophonic invasion that floats above the convulsing depths. We flow into Beginners, a pulse-racing closer that thumps you around the head repeatedly. After an exhilarating hour, Hookworms’ churning music throbs slowly to a halt, and the band one-by-one puts down their instruments to slope out of sight, leave the crowd slightly dazed and drooling in their wake.

Find more images from the show below, courtesy of Shali Blok and including special guests Virginia Wing.