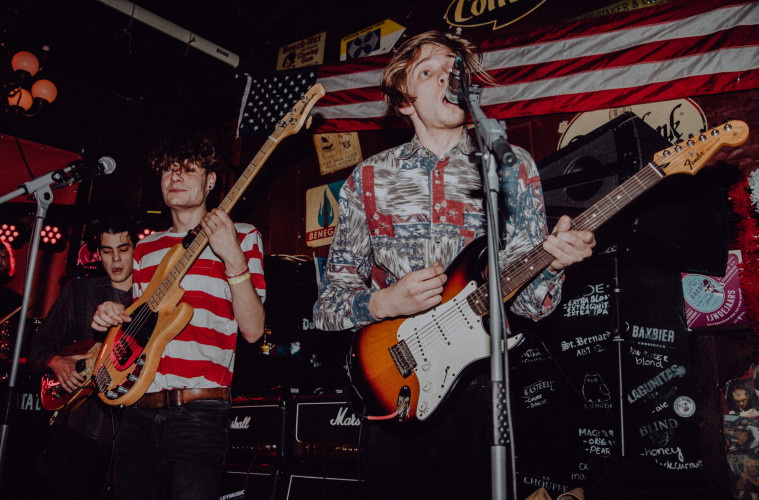 Who Should I Go See At the Popronde This Year?

Two years ago I’d never heard of the Popronde. I was a Brit living in Australia, and the Dutch music scene was something as alien to me as full sauna nudity. Moving to a new country and trying to make sense of its local scenes can be intimidatingly confusing when faced with a list of names which read like an elongated Tourette’s syndrome outburst. My first Popronde experience was a haze of confusion and disappointment, wandering around Nijmegen trying to find something I liked, but with no more preparation or guidance than “that sounds like a good name for a band”. It was cool to see it all happening and get caught up in the atmosphere of it all, but I realised that as with all things that are fun, I needed to do my homework.

For those as ignorant as 2017 me, let me explain what Popronde is (those who already know can skip this paragraph). Popronde is a travelling music festival that takes place every autumn from mid-September to the end of November in approximately 40 cities around the Netherlands. In each city, between 25 and 75 artists perform in a variety of venues (anything from churches to cafes). The festival aims to provide an overview of what is happening musically in the Netherlands and to give unknown bands the opportunity to perform outside their own hometown. Over 1000 bands apply to be part of the festival, of which a lucky 120 to 150 emerging bands are picked. The shortlist is chosen by a selection committee consisting of professionals from the Dutch music scene. For musicians, the aim is to gain experience with touring and performing in different types of venues, whereas for the audience, it gives an opportunity to discover something new without having to pay for the privilege.

Over the last few weeks I’ve been listening to the Popronde shortlist on shuffle, taking notes of each artist on a private spreadsheet, like the spod I am. Using the power of science I am ensuring that this year’s experience surpasses the last one, focusing on the artists I find most interesting. Via the power of Excel, I made an extensive list of comments on each artist including positive ones such as, “Heavy weirdo punk, kinda like it. Quite Lightning Bolt-esque, probably badass live.” or “Proper loungecore, but something kinda appealing about it, like Destroyer’s Kaputt. Pretty bold.” But also “Bland shit pop, audio wallpaper” & “Boring big-riff rock with lyrics so bad they border on parody”. I’m not naming any of the negative names (who has time for that noise?), but without further ado, here are some of the artists worth checking out as part of this year’s festival.

The beautiful melancholic tones of la loye (Lieke Heusinkveld)’s voice are perfectly complemented by haunting yet unpretentious instrumentation, with the track to live underwater having the low key effect of stopping you in your tracks through pure subtlety. Lyrically, the themes of isolation and introspection are given additional gravitas with the deflated delivery, yet through it all there’s a pang of optimism which gives you the perspective of someone who’s been through the worst and managed to come through the other side. For fans of Beach House.

There’s an infectious groove to The Vices which hooks you in from the first listen. Recent single Life Grows has more than a hint of Franz Ferdinand at their strongest, but with a more relatable delivery that gives their music a more personable vibe. Frontman Floris van Luijtelaar has a vocal delivery reminiscent of Arctic Monkeys frontman Alex Turner. However, when the band alternate between disco and surf rock, it gives their whole vibe an identity of its own. For fans of Franz Ferdinand.

Bec Plexus is weird. Willfully weird. The closest comparison point I can draw is Björk, but not in the sense that she sounds like Björk; more in the sense that she has the same level of wild creativity and boundary-pushing tendencies. An artist in every sense of the word. Her classically trained background just opens worlds of possibilities soon to be realised on her debut album Sticklip. For fans of Björk.

There’s a freedom of expression through electronic music which grants such wide-reaching possibilities that it’s almost difficult to find a way to reign it in. Artists such as Jon Hopkins, Nils Frahm and David August channel this into a form which takes from multiple traditional genres to create their own sounds which touch on everything from ambient to trance in order to create something more euphoric than the sum of its parts. Fjaler is a worthy addition to this canon of wildly creative solo electronic artists who weaves improvisation into the fabric of what he does. For fans of Jon Hopkins.

There’s a riot grrrl revivalism running through Get Jealous, with their short, bubblegum pop-punk hinged around visceral, relatable lyrics which leave little to the imagination. There’s a wild streak through their sound, yet recorded pretty clean-cut, creating earworms which are hard to get out of your head hours after they’ve finished. For fans of Sleater-Kinney.

If beautifully produced catchy songs which hinge around a fragile voice sound like the sort of thing that might appeal to you, then you should check out A.M. Sam. His EP Up In Silver Lake is so riddled with wide-reaching influences that it’s hard to keep track, both tracks offering very different types of earworms. There’s clearly a wildly creative streak through these two addictive tracks, and it’d be interesting to see how it translates live. For fans of Beck.

Hytes are a three-piece act who don’t just produce gorgeous electronica, but complement their live bass music productions with 2D & 3D art designed to enhance the music. With live drums and a handful of EPs ranging from bass music to something more up-tempo, they’re an act for whom the live experience can only amplify the lusciousness of their recorded output. For fans of Flume.

Ethereal and haunting, Robin Kester creates a beautiful sense of an other-worldly unease in her beautiful songs. Her voice sits at the centre, accompanied by instrumentation which ranges from a simple acoustic guitar to an orchestral swirl. Each song displays an abundance of talent and maturity, with her sound becoming more grandiose with each release. For fans of Julianna Barwick.

Seewolf create atmospheric pop-rock with hints of modern psychedelia, sounding simultaneously introverted and extroverted. Coming from Friesland, their music captures the vibes of a stark isolated winter in the north of the country. This is contrasted with the analogue warmth of their studio sound. For fans of The National.

Of course, there are tons of other artists worth checking out too, and chances are, you’ll think my taste in music is pretty awful. However, if your life is too busy to look into these things then you could do worse than checking out some of the artists above. Take a look at the timetable and dates for your nearest city takeover, and have a go at finding your new favourite artist. Stranger things have happened. Details here.