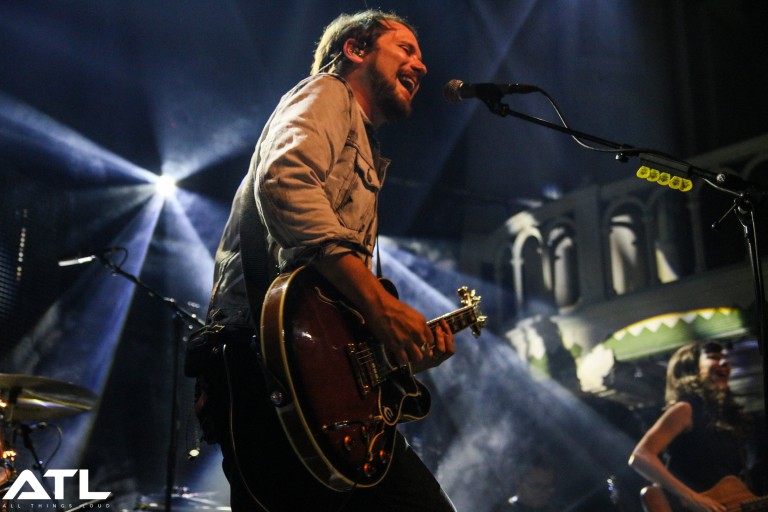 It’s been a few months since the tenth anniversary of Silversun Pickups’ debut album Carnavas when we find frontman Brian Aubert and bassist Nikki Monninger in the backstage basement of Amsterdam’s legendary Paradiso. The band, completed by drummer Chris Guanlao and keyboardist Joe Lester, are busy prepping for a headline set later that evening at the bi-annual London Calling Festival. New album Better Nature is already more than a year old, and Aubert and Monninger have plenty to discuss once we sit down with them on a small sofa in their dimly lit dressing room for the first edition of In Conversation With…

I’m good thanks! Your new album Better Nature came out last year. Can you tell me a bit more about the recording process and story behind the record?
Brian: Usually, with us at least, your headspace and the sonic glossary that you use on the previous record become quite nostalgic. Once you’ve done it and toured the music for a couple of years, it’s almost like you’re cleansed of it. Your mind is now almost free of it, and it starts wondering into different directions to see what tickles it. You also get older, and a lot of things obviously change. For the previous record we had a lot of these geometric rules, so for Better Nature we just let everything explode out of us. We turned it up all the way, almost like a fever dream in a circus. We wanted it to be very present tense. Usually you can set these rules or ideas to help you get started, but this one didn’t feel that way. Once we wanted it to feel like a circus, it was one. It flew out of us! It was such a pleasure. Now it’s been a year right?

Nikki: One year since it came out, yeah.

Brian: I guess. We’re pretty deep into the record when we play the songs, as it was a year of writing and now a year of touring. It feels like the ceiling popped off.

Jacknife Lee produced it.
Brian: He did, and he did the one before that too!

What did he bring to the table this time round? And how did you approach it this time round?
Brian: We were a little bit more focused on how he works. We always like to work with someone a second time, and Better Nature is only our fourth record. We’ve only worked with three or four producers in our band life, but we’ve only done it twice where we had two producers back to back for two records. The second time you work with someone always tends to go real quick, and all the steps that you went through the first time, like learning about each other’s mannerisms, all disappear because you just know how to do it. We knew how to deal with Knife. Knife already is quick, and once you start something his chaotic brain, umm…have you seen the show Stranger Things?

Yeah, it’s great!
Brian: Okay, so. People come into the studio, which is a garage up in his house. It’s not a real studio, so it’s quite casual. Things are so chaotic in there that everyday there would be, like, a new string of Christmas lights hanging up that he ordered. They’re everywhere, and it looks straight up like when Wynona Ryder’s lost her mind. It’s insane! That’s also what it’s like when you’re making the record; you could get lost in all the bits, but you’ve just gotta pay attention. Also, us having worked with him before and now coming to make music from a different point of view also worked for him. He also worked with us before and is now approaching us with a different point of view. It goes two ways, and we just collide. When we show him our demo’s, the moment in which we’re most brave and our critic is off, his job is to then see and know what we want from it. It stops us from chickening out if something is ‘too soft’ or ‘too weird’. He’s just like, “that’s what you want, and we’re doing it”.

Would you do it a third time?
Brian: Yeah, we’ll always wanna work with him. It just depends on where our heads are at. It’s always good for us to shake things up, but who knows?

Nikki: We love him, and he’s like family to us.

Brian: We’ll always wanna work with him. It’s whether or not it feels like we should. Does that make sense?

Oh yeah, I get it. You’re also not the first band I’ve spoken to lately who’s had high praise for Knife. Are there any other producers you’d ever want to work with?
Brian: Oh boy, I don’t know! I mean, we’ve been friends with Butch Vig for a while and we’ve always loved him. I sang a song with his band Gargabe for a Record Store Day release, and I love the way they work. I love Dave Fridmann as well.

Nikki: We’ve never really been asked that before.

Brian: I think it depends on a) who wants to work with us and b) who is available. And also if they want to work with you, of course. If you see people you want to work with, they have to feel the same way about you. I wouldn’t work with anybody who had no interest in us.

Nikki: Usually we don’t think about these things so early to be honest.

Brian: The problem with us is that we’re unable to see the future until we actually get there. It’s frustrating for the people around us, because we always make a decision once we’re there. We like to make sure that we have an idea of what we’re bringing. We tend to come into these things pretty heavy loaded, and we’re definitely not a band who let the producer walk in and do whatever they do. That would be crazy, haha. They’re supposed to help you be a better version of yourself than you’re willing to be. Does that make sense?

Yeah!
Brian: We love it though, because with Knife he’s like family to us. When we do little projects here and there, we just call him up and head to his for the weekend.

It’s been 10 years since your debut album Carnavas came out. How do you feel about that record looking back on it?
Nikki: It’s interesting to me, because it’s like watching a history of our life together as friends and it brings back so many memories.

Brian: The record does?

Nikki: Yeah! If I hear things from Carnavas I think about where we were at that time, and it provides me with a lot of nostalgia. Stuff like who my roommates were back then, and other little moments in time which ultimately manifested in Carnavas.

Brian: It’s certainly shaping itself in that way. To me it still feels like a gelatinous blob, like one long smear. Do you know what I mean? But then when I look back on the recording of it, I’m all astonished like, “fuck, who are these little assholes?”

Nikki: It took a while to come out, too. We were already a band for like five years before it came out, so the record was an accumulation of all the years we spent working on it.

Brian: We don’t really tend to listen to our older songs to be honest, only if we’re planning on playing a song live that we don’t usually play. We want to make sure that we’re still playing the right song, so we like to make sure that we’re on the right map. I don’t get nostalgia from these songs because, to me, they’re still current and we play them a live a lot. However, if we go deep and I start playing something really old during soundcheck then my brain trips out.

Nikki: We’ve been playing Three Seed more lately, which we haven’t played in a while.

Brian: Still, we’ve been playing that one a lot too!

Have you got any plans to commemorate the anniversary of that record?
Brian: You know, we’re so busy that people on social media actually had to let us know about the anniversary. There was an EP which we released a year before Carnavas came out called Pikul. Did that come out in Europe?

I’m not sure.
Brian: That got played on some stations in the States, and from that we were touring and making Carnavas. Pikul turned ten in 2015 and we wouldn’t have even thought of it had nobody reminded us on Twitter! Carnavas was the same. There’s talk of maybe doing something small, but every time we get around to that thought we’re usually so done with touring that we want to get on to the next thing.

Nikki: I mean, I enjoyed going to shows like that when bands play albums in full. Like when Kraftwerk did each of their albums! I thought that was great.

Brian: That was amazing yeah. I love when Kraftwerk played all their records live and you could see which one was most popular just based on which shows sold out the quickest. It’s fantastic! It’s so great that they’re still so culturally relevant. Whenever I see videos of what they’re doing now, I’m like “wow!” The world caught up with them, and they’re just doing what they always did. I don’t know how I feel about bands playing their own stuff live; Kraftwerk yes, but actual bands I’m not so sure. Really old classic bands for sure, though. Just not us.

Nikki: We haven’t really thought that much about it to be honest.

The festival you’re appearing at tonight, London Calling, places a heavy emphasis on young bands. Is there anyone on the line-up who you’re interested in? Or new bands you’ve been enjoying lately?
Brian: I love, umm, Kate Tempest. Man, she’s great. You know who she is, right?

Yeah, yeah.
Brian: It’s such a bummer, though, because we’ve been touring around her. It’s one of those things that happens where we see that she’s toured right before or after us in the same place.

And she’s here next week too!
Brian: Man…she’s astonishing! I can’t even understand how that happens, she’s so good. It’s so unique on so many levels, and her vocal sound is great.

Brian: Yeah, they’re friends of ours. I also love Savages, and Courtney Barnett is the best, I love her too. What else?

Nikki: Umm, that’s all I think!

Brian: Great, nailed them all!

Well thanks for your time guys!
Brian: No worries man, thanks!

Better Nature is out now. Watch the video for Circadian Rhythm (Last Dance) below.