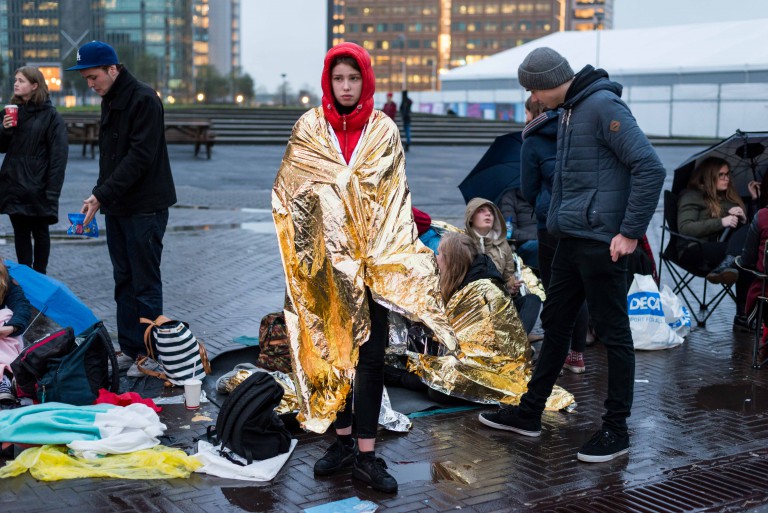 Inside the World of Twenty One Pilots’ Dedicated Fanbase

twenty one pilots. Admit it, there’s no escaping their stratospheric rise to fame over the last twelve months. The Tyler Joseph and Josh Dun-duo are still riding the waves of success which 2015’s Blurryface brought them, and it’s only provided them with more and more chance to increase their fanbase tenfold. Ahead of their show at the Heineken Music Hall in Amsterdam last night, photographer Lotte Schrander ventured out to document exactly how dedicated fans of the two-piece are.

Speaking of the images she captured, Schrander said: “Last weekend I was here to shoot Bring Me the Horizon at the Heineken Music Hall. Around 5pm that day I spotted the first tent, and in it were two fans there not only for Bring Me the Horizon’s show, but also for Panic! at the Disco’s the following day, and Twenty One Pilots’ the day after that. The last three days have been absolute chaos for the Heineken Music Hall, and yesterday I returned on the day that Twenty One Pilots appeared. At 3pm, there was already a line from the entrance all the way back to the local train station! One proud fan told me that she’d been waiting in line since 10am the day before, and she wasn’t even the first fan in line. To be fairly honest, though, I think this is borderline crazy. Is it not so much better to go to school or work first and then, in your own time, go to a show without being exhausted or getting crushed by crazy fans?”