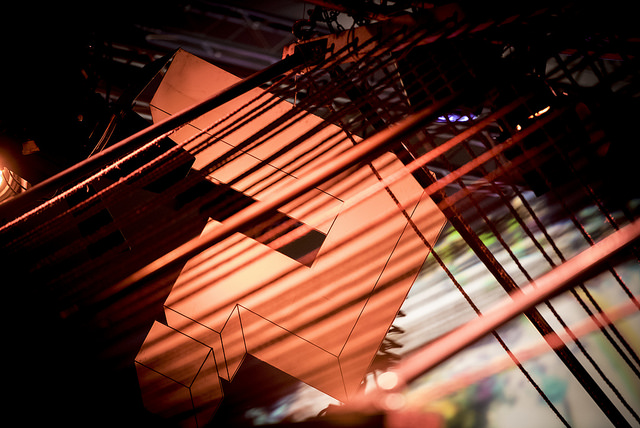 We sent music lothario Richard James Foster to the annual Le Guess Who? Festival in Utrecht to sample the musical delights that the four-day festival had to offer. See below his third contribution, which outlines the festival-within-a-festival, Le Mini Who.

An early start (so as not to miss Le Mini Who, now 5 years old, how?!?) has meant drastic remedies such as teabags on eyes and one of those overpriced kiwifruit juices served on ice at the train station. Neither do much. Not as much (shamingly) as the first beer in Café Tilt where we are crammed in to watch Deutsche Ashram. “What a name for a band”, says one of my rock writer colleagues. And it is. Those readers older than 16 may recall that the name is uncannily close to an Amon Düül 2 song on the Wolf City LP. This is no bad thing. On the contrary it’s a very good thing as it shows these cats know their shit. Deutsche Ashram are a two piece, formed by Ajay Saggar of Bent Moustache and King Champion Sounds fame. He’s joined by singer Merinde Verbeek, whose role is to drop thee most ethereal vocals this side of Garlands over a shape-shifting, sometimes glittering guitar/AppleMac wash. Verbeek also throws in some wild swaying for good measure, evoking death dramas in a Victorian nursery. They are joined by a third – occasional – guitarist who keeps the Ashram airship moored to the ground with some serpentine guitar runs which have something of Eric Cheneaux about them. The general effect is sometimes like Siouxsie, at others like Sandy – maybe an amalgam of both – with Liz watching closely over their shoulders. The slow builds are very effective and the room sways and dips along to the ebb and flow of the music. Quietly wicked and equally ace.

We grab a beer at ACU and talk to some of the Lost Bear & Sweet Release of Death people, who are playing the 5 Year Party tonight, with Bonne Aparte (that is some line up!). Then it’s off to the Village Coffee & Music. You know, if I was a sarcastic type, I’d say having gigs in Free Range-ah coffee/multi-functi shops that pretend to be in a village in a city centre is one reason why Donald Trump got elected. Luckily I’m not, and I’m packed in, with what seems like half of Utrecht’s best-bearded, to see a band going by the name of Charlie and the Lesbians. As well as being brilliantly literal about their band’s provenance (look it up) Charlie and the Lesbians deserve enormous credit for serving up one of the most enjoyable gigs I’ve seen this year. They scream down the Village with the most brutal brat-squeal antics seen since Toyah decided she wasn’t going to school back in 1981. They come on like the huge baby in Miyazaki’s Spirited Away. Or maybe like a harder, faster take on that other great non-band, Gul Night Out (of most blessèd memory.) The singer, (that’s Charlie, btw), sporting a moustache only seen on mechanics on Liverpool’s Edge Lane and wearing his hair like a Norman knight, blasts the crowd with a voice that sounds like a dying vacuum cleaner. For their part, the band set up a set of Speed Glue & Shinki gonzoid work outs that never get out of third gear; numbers that somehow mutate in a low grade Cramps rip offs by the end. At some point one of the organisations snappers barges in imperiously to get some pics. Charlie targets her and does his best to stop her getting any good shots of the band in action. Her refusal to be beaten gets Charlie all the more agitated, and he decides to bounce against the counter where the snapper is, risking carnage to the scone and hash brown display. A true metaphor for rock and roll C21st style. I like the thought of the scones copping it. Immensely. So do others, drawn into this utterly childish scene. One excitable English journalist decides to proffer a honey pot to the singer; maybe a signal that he could be Iggy’s latest low-grade heir. Afterwards we troop out gibbering. Follow that!

Luckily we can by taking in a gig that comes in from another side of the Dutch “underground” spectrum. Kanipchen Fit are battlers, old hands, vets. This NL-US duo-cum-trio have been knocking around the circuit for years, quietly building up a solid body of work. One of the few Dutch bands this past decade to work without relying on a type of sound, they strip back everything and deal in message, and attitude. Their thing is to knock the audience over like skittles with the emotional content inherent in their message. They use every ounce of energy they have to hand to do this. Guitarist Empee moves back and forth like some old school, Mick Jones punk, knocking out rough-and-ready, almost cavalier guitar patterns and hustling chord changes like they are jokers in a pack of cards. Pinning the music down is drummer Frankie, who ticks along like some toy train on a track. As a whole it’s quite overwhelming. The audience (noticeably a very female one) is utterly sucked in by this emotional battering, and grooves along dutifully. It’s a shame that such a band doesn’t get more of a look in. After that we kind of catch Lost Bear but don’t, (but wish we had as we get turned away for Circuit des Yeux) and we can’t get into Sweet Release of Death in a jammed ACU, but from the doorway they sound as if the world is ending. It’s all good, and think – the main festival is just cranking up! Mental.

Check back tomorrow for the fourth instalment of Richard’s Le Guess Who? adventures.