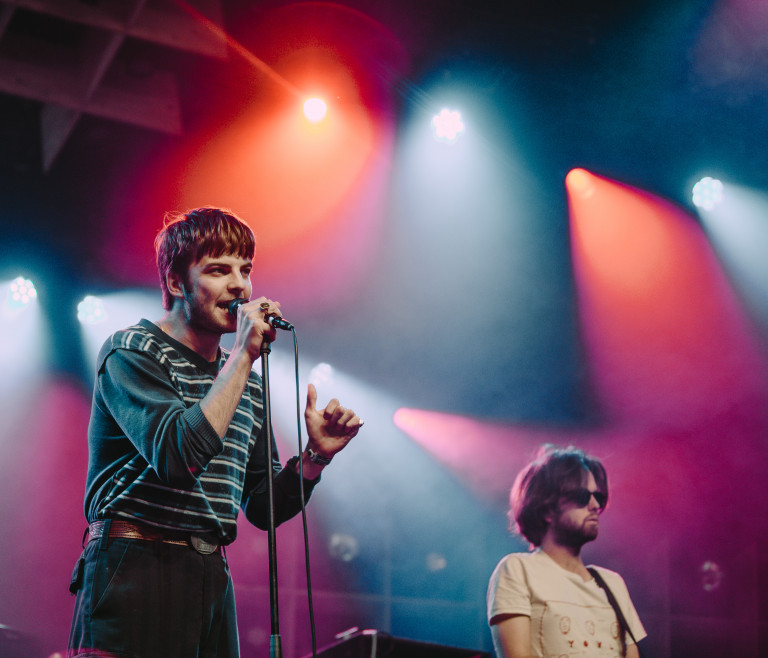 There’s a lot to be said about a festival’s ability to put a summer’s worth of big names into one jam-packed weekend. This year, Lowlands has really rolled out the red carpet and managed to put together a line-up which is considerably stronger than anything in prior years, with ultimate bill-toppers sandwiched between up and coming prospects and some truly old greats. The first day of the Biddinghuizen found a late replacement headliner in De Staat, who pulled off their biggest show to date on the gargantuan Alpha stage. Elsewhere, new prospects Fontaines D.C. absolutely crushed it, standing out on a day with plenty to talk about.

The main talking point of the day, though, wasn’t the music: it was the weather. Bad forecasts have marred this year’s edition, with a small number of visitors also selling their tickets in anticipation of a weatherly shitstorm which has so far turned out to not be that bad at all. The day started with a hefty dose of tropical Thai funk courtesy of YIN YIN, a new Dutch band whose biggest hit sounds exactly like an exotic interpretation of Donna Summers’ I Feel Love. Seriously, put the tracks next to each other and you’ll hear what we mean. Frank Turner and his Sleeping Souls kicked things off on the Alpha stage the same day that new album No Man’s Land sees the light of day. It’s an album which counts stories of powerful women across world history, serving as a concept album of sorts which comes to life far more on stage than off of it. The Alpha may not have been full, but that didn’t stop Turner from putting on a show of the highest quality (just like always). Slaves stopped off over on the India stage, their rattling punk jams still fresh albeit unsurprisingly predictable. PUP also bordered on the predictable in the sweaty X Ray, a tent which was far from full. What the crowd lacked in size, though, was certainly made up for in energy. Frontman Stefan Babcock didn’t wait long to get into the crowd, with he and his band rambunctiously tearing up the stage. While avoiding any and all talk of Anne Marie and Ronnie Flex, let’s also add that FKJ was very, very good once again. Tommy Genesis stopped off at the X Ray a little later, although it’s safe to say that you didn’t miss much.

The Growlers don’t play many shows in this part of the world nowadays, with their Lowlands set one of just five European shows for the entire year. New album Natural Affair is due in the fall, although Brooks Nielsen and co. didn’t lay any focus on it save for its mellowed out title track. Instead, the set largely served as a beautiful, hour-long greatest hits performance. The first half centred heavily on cuts from the Cali band’s earlier work, with highlights including a rousing Naked Kids and absolutely electric Empty Bones. It was at this moment in the show that things really got exciting, culminating in a brilliant one-two finale of slick disco cuts City Club and I’ll Be Around. The latter sent the full Heineken tent into somewhat of a frenzy, and that only meant one thing: The Growlers came, saw and conquered Biddinghuizen. Also at the top of their game were the crazy Aussies in The Chats, who tore the X Ray a new one with their manic punk riffs, brazen rhythms and songs about smoke breaks (Smoko), pub food (Pub Feed) and being framed for a robbery (Identity Theft). Much of the same can be said for Jungle, a funk collective so solid that every single show they play is all sorts of magical for all the right reasons. New album For Ever – their second – is a wonderful exercise in soul and funk, featuring ultimate highlight Heavy, California. Jungle are an incendiary live band, returning to bigger and bigger stages every time they come back around. Main stage next time, perhaps? Over on the Heineken stage, The Streets‘ Mike Skinner demonstrated exactly why he is still one of the most enigmatic British rappers of all time, commandeering a full tent to the sound of his timeless voice. Fit But You Know It, anyone?

It’s safe to assume by now that we’re all aware of Fontaines D.C.‘s status as the ultimate hype band of the moment. But for how long will that hype last before it begins to subside? If the band’s Lowlands show was anything to go by, then it’s going to be a hell of a long time before we start getting tired of Grian Chatten and co.’s infectiously explosive post punk. Debut album Dogrel is a thing of poetic wonder which really comes to life on the big stage. It thus shouldn’t come as a surprise that the hour they spent on the India stage was an extremely special occasion. Over on the Lima stage, Japanese indie rockers Hyukoh proved to be the surprise of the day with their jangly groove-laden tunes, all of which carry with themselves a sense of boundless joy. The crowd responded well, and the rest – as they say – is history. Lowlands veteran Jarreau Vandal had some difficulty keeping the attention of a sparse X Ray crowd, much unlike Jorja Smith over on the massive Bravo stage. Her voice is as solid as a rock, with a live show to match.

Speaking of rock, Royal Blood stepped up to the task on the Alpha stage as sub-headliners for De Staat. Although the band are definitely at a level which would warrant a full headline slot, it seems like they’re quite content with playing lower down the bill while album number three is still in the making. A handful of new songs crept into the duo’s Lowlands set, the highlight being a sprawling Boilermaker. When you see Royal Blood live, you know exactly what to expect. And despite the obvious predictability of their music, there is absolutely nothing wrong with it. If their rabid rock wasn’t your cup of tea, then the soulful RIMON was the perfect alternative over on the India stage. Are The Good, The Bad & The Queen perhaps a little too intimate for the Bravo? That’s a question many asked when the Damon Albarn fronted outfit found themselves billed on such a large stage. Maybe they were, but the cavernous green tent didn’t stop Damon Albarn and his band from transforming it into a sonic wonderland filled with beautiful, intricate moments. New album Merrie Land is a twinkling collection of music from Albarn and his band (which features Paul Simonon and Simon Tong, among others), and at Lowlands it came to life for those who wanted it to. And for those in attendance, a jubilant Albarn had a very sombre message: “this is our last gig”. Make of that what you will. Channel Tres utilised slick choreography for his show in the X Ray, kicking off the set solo before two dancers joined him onstage. Eventually he joined them, and it looked like something out of Vogue. If De Staat’s larger than life headline show wasn’t your thing, then you would’ve been right at home.