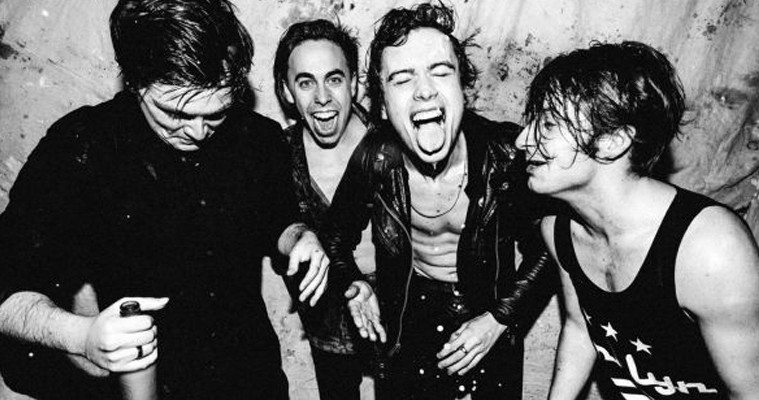 Otherkin: “If you’re not unique, then you need to be the best that you can be”

As a young bang, gaining even a slither of momentum can be a gargantuan challenge for even the most determined musician. Some go all out and extend themselves out of their comfort zone, whereas others just stick to what they do best and hope that it does them wonders. Irish party starters Otherkin fall under the last category, with their infectious indie rock having set the world alight ever since word of their manic house party gigs started spreading. We caught up with the band backstage at Lowlands Festival to discuss their formation, the state of music in Ireland and how Eurosonic Noorderslag became their career turning point.

How did Otherkin come into existence?
Three of us went to Toronto in Canada and we were just jamming with some acoustic guitars in the searing heat. David (bass) had just started university, and when we came home we told him we’d started a band. It took ages for us to do that, so we were just like “fuck it, let’s start a band”.

You released a new EP, The New Vice, this year. Can you tell us more about the recording process?
We recorded it at this studio in County Kildare, which is in the Irish countryside and just west of Dublin. It’s basically just a small studio in the Irish suburbs. We had these songs which we really wanted to record, and our label wanted to release something. It was a very easy process, especially because we were just a studio band recording in what was essentially a shed. A very big shed, but nonetheless a shed.

You describe your sound as grunge pop. Which artists and elements from each genre influence your sound?
I think a lot of the newer grunge bands influence our sound, like The Vines and stuff. Obviously stuff like Nirvana and L7 too. Nirvana were a hugely influential band for me, and Nevermind is my favourite album of all time. When I was 12 I found it, and I started playing guitar. What I love about Nirvana is that you can take away all the distortion in a track, and it’s just a pop song. That’s what we try to do; we like our heavy guitars, but at the same time we want the melodies there at the forefront. We all love good pop music, because we all grew up with the radio on in the background all the time. You know, stuff like Sugababes and All Saints and whatever was on the radio. U2 are considered more of a pop rock band in Ireland, and we all really like them. We don’t sound like U2, but when you’re Irish you hear them all the time. We also listen to a lot of Riot Girl stuff.

How do you ideally see your sound evolving for future releases?
Lots of synths, haha! It’s a joke. You never know. At the moment we’re writing for the album, and it’s quite a diverse collection of tracks which are all more melodic. Some songs are also heavier than anything we’ve ever done. We’re writing a song at the moment that’s like, “fuck it”. It’s the most punk thing I think we’ve ever done, a bit like L7 in a way. We’re trying to broaden our sound, and we want the songs to sound cohesive in a way that still shows off all the different types of music we like. I’d say that a band like Arctic Monkeys evolve with each album, but they’ve not totally changed; they just mature. The most important thing for us is the quality of the songs. We want to put out an album where each song is a 10/10. We’ve thrown away at least twenty songs so far.

You played at Eurosonic Festival in Groningen earlier this year, a show which was received extremely well. How much of a turning point was that for you as a band?
It was great. We had a lot of stuff going on that day, like promo stuff and radio interviews. By the time we got to the gig, we almost stopped thinking about it. Every time we play a show in Holland things get better, and that gig was the one that opened the door to all of Europe. We’re all from Europe, but it’s just so much better here. Eurosonic led us to getting loads of bookings for shows all across Europe, like France and Germany. It’s been amazing, and really good for us. You guys just seem to get it.

But how tough is it for bands like Otherkin to make a name for themselves in the first place? Especially in such a saturated market.
For us, we really concentrate on trying to do one thing really well at a time. Back then, it was just to write really good songs. I think we just focus on a few songs to be really good, and then we look at the live show. It’s all about making sure that everything you do is as good as it can be. As you say yourself, there are a million four-piece guitar bands. If you’re not unique, then you need to be the best you can be. You also don’t want to overthink things. This is the music that we want to make, and we think that it’s of a certain quality which we wanna showcase in a live fashion.

How’s the local scene back in Ireland?
It’s very, very diverse. I don’t think you’d go to a gig and see just three rock bands. There’s great folk bands, great rock bands, and a whole independent music scene too. We have a lot of guitar bands here that nobody else would know, like a band called Squarehead who we all love. I’d say that their first album is one of the best albums that I’ve ever heard. And they’re just in Dublin, which is crazy! Some of the bands in Ireland are amongst the best we’ve ever heard, and a lot of them get outside of the country. It’s not due to a lack of ambition, but maybe they just don’t want to do it for a living. The quality of their music is insane, though. We look at these bands and say, “we need to be better than that”. There’s a really great scene of putting on gigs in your own house and stuff. Some of our first gigs were house parties that we put on ourselves. We would put on a band nobody knew first, then we’d play in the middle and get a band we love to play after us. We got Squarehead to do that, and also a band called Moons. We just love doing that.

How do you bring that ‘house party’ vibe to your live shows?
The reason that our live show is the way it is is because of the fun and chaos from all those house parties we played. Irish people love to party! If you play a gig to a normal audience, you have to try and get the crowd to be as crazy as at a house party. It’s great when you don’t have to worry about the neighbours, y’know?

So what can we expect from Otherkin in the next year or so?
A lot of gigging. I think we’ll be travelling through Europe and beyond, and then working on our debut album. We’re pretty much nearly finished writing it, and we might even get a new single out before the end of the year. That’s what we’re aiming for at the moment, and we really want to get the album right so that we can say to people, “look: this is Otherkin. We hope you like it”.

Thanks for your time!
Cheers!

Catch Otherkin as part of Indiestadt Festival this week at the Paradiso in Amsterdam. Listen to Yeah, I Know below.