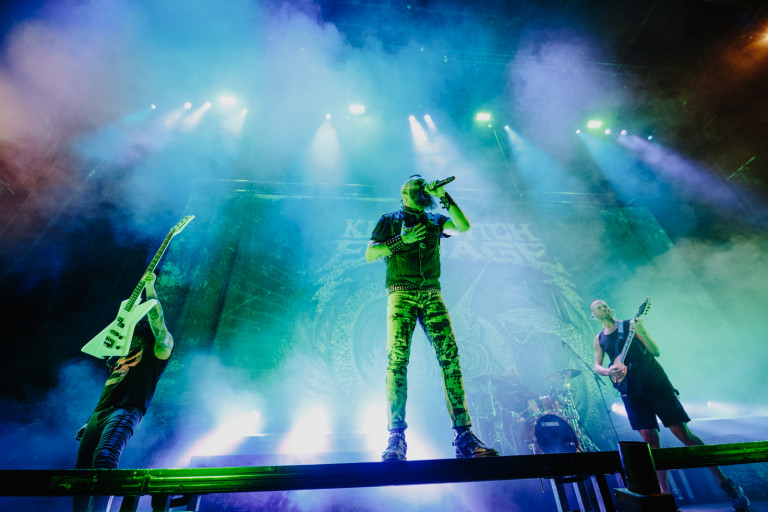 Later this week, American metallers Killswitch Engage will unleash their eighth studio album, Atonement. The album – their first with Metal Blade Records – comes in what’s been a busy year for the rockers, who never seem to catch a break from the road. Jack Parker called up guitarist Joel Stroetzel to talk all things Atonement.

Hi Joel. How are you?
I’m doing very well thank you.

Tell me more about Atonement’s creative process. What’s new in the world of Killswitch Engage?
It took a while this time. We all live in different places to one another so we ended up writing songs individually and on the road, and then we pieced it together afterwards. The songs bounced around a lot! Jesse (Leach, vocals) also had vocal surgery at one point so we had to put things on hold. We’re all really happy with how the album turned out, though!

Did your own gear set up change much?
No, not so much. We did a lot of guitar tracking at mine and Adam’s houses, where we basically did it all through Kemper’s before it got re-amped during the mixing process. We did everything at low volumes from within the convenience of our own homes, haha.

So how does Atonement set itself apart from its predecessor?
I think the first couple of songs we put out were a little bit slower, but throughout the record it goes back and forth between some mid-tempo stuff and a lot of the thrashier sounds we explored on Disarm. It’s a little bit more of a rollercoaster ride than Incarnate (2016). It still sounds a lot like Killswitch Engage

Did you approach it in a different way to Incarnate?
We didn’t necessarily take a different approach to be honest. Because we all live so far away from each other we’re kind of forced to approach it in a similar way in how we come up with initial ideas and then put them together beforehand. It’s been a while since we stood in a room and jammed together.

Do you miss that way of working?
Yeah. I think that’s something we’d want to explore again in the future. We miss renting out a house and just jamming in a room like we used to. Doing it this way does work out good for everyone, though.

But what does it do to the band dynamic, recording in such an isolated manner?
It takes us a little bit longer to rehearse all of the songs and get them together. Some of the songs were recorded and completed before we even got the chance to stand in a room and play them as a band, so it was definitely a challenge figuring out what overdubs we’d have and who would do what. That’s one of the main challenges of doing it this way as opposed to standing in a room together. We try to think ahead, though. Like, we won’t record six guitar parts knowing that we don’t have six guitars to play it with, haha.

Jesse had an operation midway through the recording  process. How did that affect the rest of the band creatively?
Not so much, as most of the music had already been tracked. Drums, guitar and bass were pretty much done so when Jesse had his operation we took a break and let him rest. We ended up cancelling a short tour so that he could have some time off, but now he feels better than he’s ever felt before.

There’s a song on the record featuring your original vocalist, Howard Jones. How did that feel for you as someone who has been in the band since the start and seen vocalists come and go?
I think it’s a cool thing. We’re all still good friends with Howard, and we all loved his voice. He’s always going to be a part of the family! It was a cool thing for us to have Jesse and Howard sing together as there just isn’t any beef between them. A lot of people will sit there and say which vocalist they prefer, so we’re like: “here’s a song with both dudes”.

Over the years you’ve toured with some huge bands who roll out incredible live shows. Parkway Drive and Bullet For My Valentine, to name but two. How does this influence you – if at all – when looking at putting together a new live show?
It’s tough to say. It’s cool to tour with different kinds of bands, and Parkway Drive are just some of the nicest dudes to be around. I think it’s cool to try and do tours with those kinds of bands so that we can play to different people and try staying relevant. The tour we’re on now with Clutch and Cro-Mags is very different, for example. We haven’t really thought about how we’re gonna do the rest of the production just yet though, it’s too early. I think it’s always important for us to reach out and tour with bands who aren’t necessarily metal bands too.

So how do you push to remain relevant in such an oversaturated corner of the guitar music world?
Sometimes it’s important for older bands like ourselves to play with bands younger or in different styles. We did Warped Tour once and all of our metalhead friends thought we were crazy. They were like, “what the fuck? You’re stupid, that’s for punk bands”. But it’s just important for us to play to different people. We were one of the few heavy bands on that Warped Tour and it was really fun to do. We always think it’s important to play for younger people, so if we can also play for brand new audiences then that’s important too.

How do you see this album as a stepping stone for the future of not only Killswitch Engage, but also for yourself as a musician?
It’s hard to say, but overall Atonement is a pretty good representation of what we do these days. We’re psyched as it’s our first album with Metal Blade Records. They push it very hard and we’ve loved it; it’s exciting, and it feels like a new beginning in which we’re still just Killswitch Engage. I think we’ve pushed ourselves on some of these tracks; also for me as a guitarist. There’s a lot of fast riffs, and some of the songs are pretty challenging. The songs are fun too, and some have solos which people will love. We’ve had so much fun doing that and putting the entire thing together. Atonement is due on Friday via Metal Blade Records.