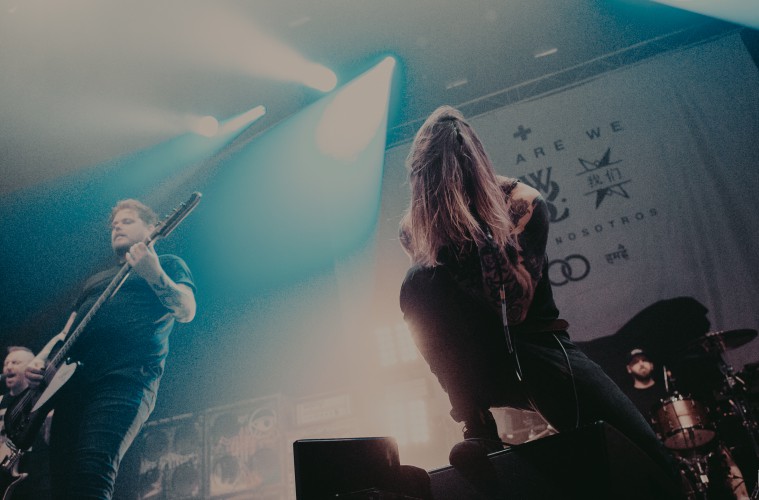 While She Sleeps are back. The Sheffield quintet today marked their return with the release of new single Anti-Social and the news of accompanying new album SO WHAT?

SO WHAT? – which is due 1 March via Sleeps Brothers – serves as the follow-up to 2017’s groundbreaking You Are We, which the band put out independently, changing the game for DIY music across the world whilst also putting While She Sleeps well and truly on the map and no longer as underdogs.

Although the new album will also be put out independently, it does see the band join forces with Universal Music imprint Spinefarm Records. “We got approached immediately by a bunch of labels, but we turned around to all of them and said, ‘The only way we’re going to do anything is if you let us release it on Sleeps Brothers, but you house that on your train, and we make the decisions behind everything,” guitarist Mat Welsh explains.

He continues, “I fucking loved releasing You Are We ourselves, but at the same time, I played more on my laptop than I did on my guitar for the whole campaign. This release is a partnership between Sleeps Brothers and Spinefarm, but no one is breathing down our necks about the record we’re making or the singles we’re putting out.”

Lawrence Taylor and co. worked on the album together with producer Carl Brown in their own Sheffield studio, and the album promises to be another defiant step forward which intends to build on the successes brought to them by the incendiary You Are We. Speaking of the new music, guitarist Sean Long said: “We’ve let our hair down and we’ve got our bollocks out. I’m not fucking about. I’m not cutting corners. I’ve been writing like this will be my last album.”

News of the album and single has also been accompanied by a fresh batch of European tour dates, including some of the band’s largest shows to date alongside special guests Stray From the Path and Landmvrks. The jaunt concludes on album release day (1 March) at London’s Roundhouse, with stops off Paris’ Trabendo and Amsterdam’s Melkweg also part of the itinerary. Find all the dates below.

Tickets for all shows go on sale this week Friday (2 November) at 10am. Get your tickets – and album pre-orders – here.