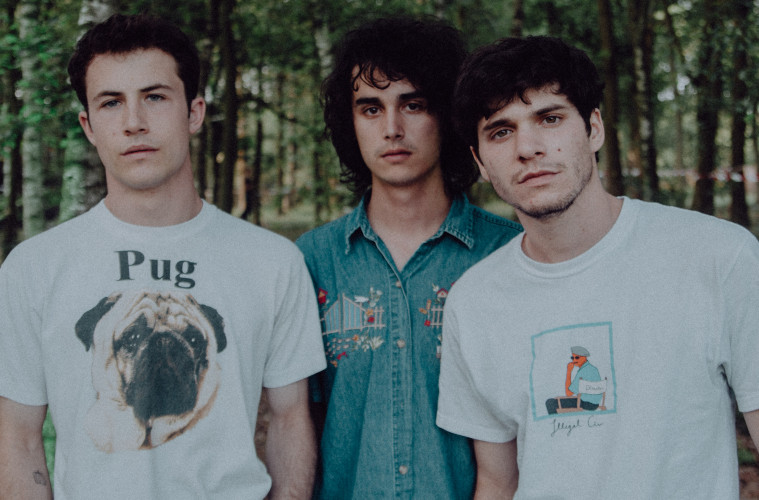 It’s a boiling hot Saturday afternoon when we sit down with the three core members of indie rock outfit Wallows. Dylan Minnette, Braeden Lemasters and Cole Preston have just completed their second ever show in Europe, a successful festival appearance on the main stage at indie hangout Best Kept Secret. They’ve been hanging out at the festival for a couple of days now, spending the Friday checking out the likes of Bon Iver and playing football. As we meet, they’re sat under a parasol in the pretty artist village, members of other notable artists dotted on the tables around them. Dylan and Braeden – both actors, too – are dressed in white t shirts, with Cole in blue. With debut album Nothing Happens under their belts, Jack Parker sits down opposite the trio to talk business.

Braeden: Yeah, playing this festival [Best Kept Secret] was really sick. I got a ham and egg tortilla.

Braeden: I had a great burger too, from that burger spot over there. 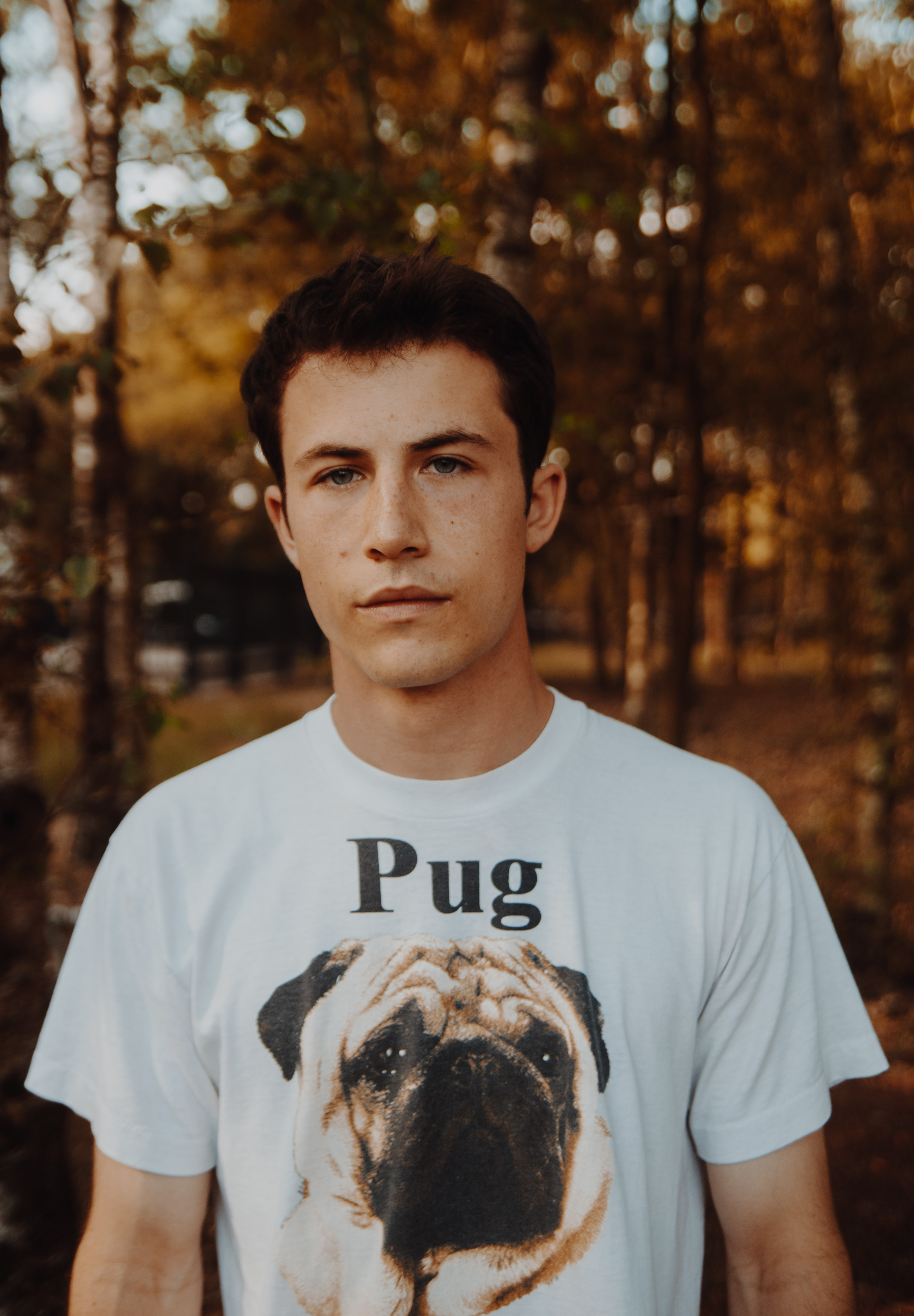 This is the first time you’ve played in the Netherlands, and it’s also part of your first ever European tour. How’s it been so far?
Braeden: Today was show number two, so it’s been a grand total of two whole shows!

That’s still something.
Dylan: Yeah, I mean both festivals were fun. Tomorrow night we play in Amsterdam and that’s our first headline show over here, so that’ll be pretty cool. It’s hard to gauge the actual crowd response at festivals, people are far more casual. I’m excited to see what kind of crowd is coming especially for us.

Did you find the Best Kept Secret crowd a tough one, then?
Braeden: They were as great as they can be, because it was so hot and the sun was so bright. I would never go to a set at that time in that heat, so I thought “power to you” to anyone who was out there moving.

Cole: They had a really good time!

The front row was literally dripping. In sweat.
Braeden: I was dripping in sweat man, worse than ever. And I sweat every show. 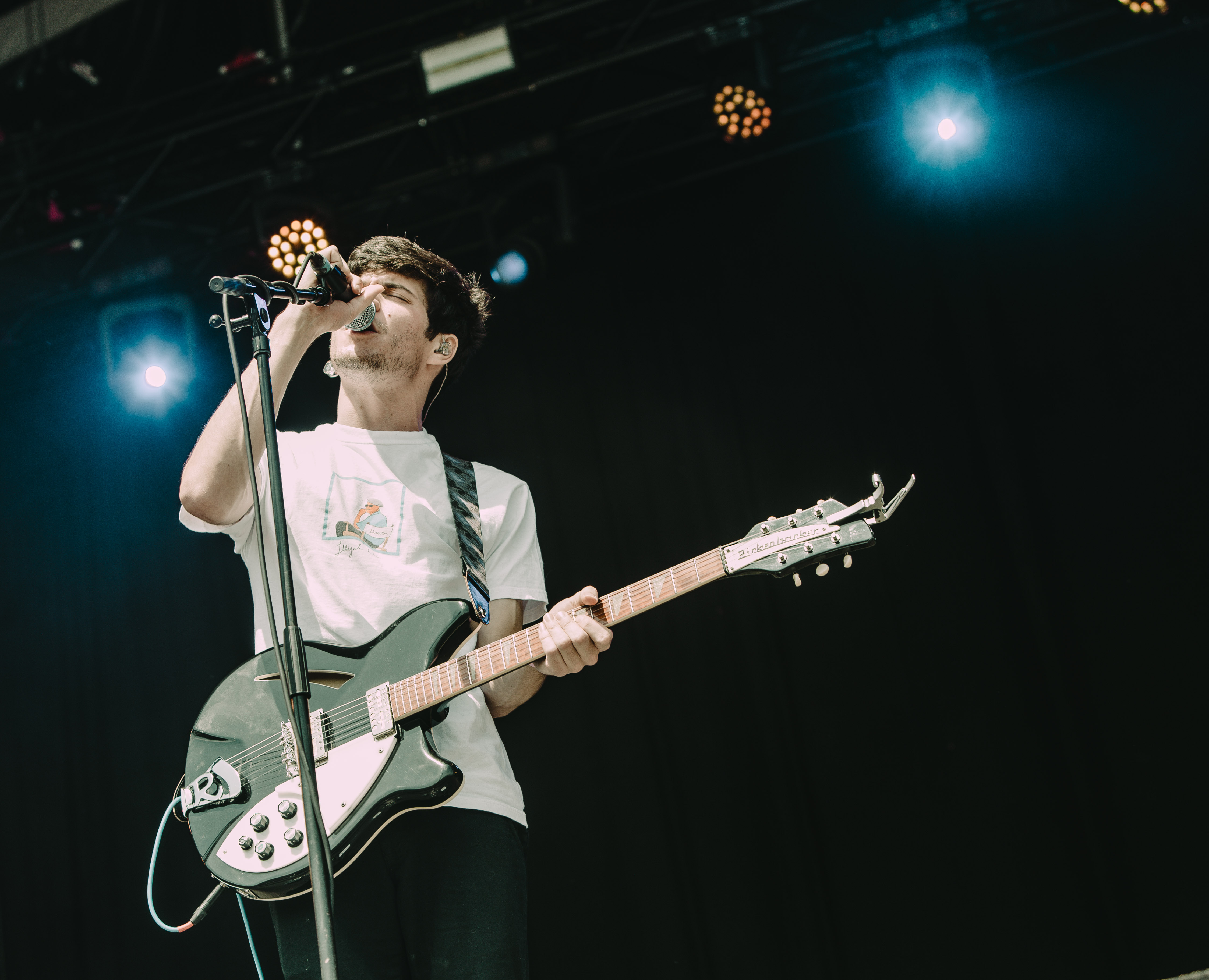 Have you ever visited Amsterdam before?
Dylan: Never, no. None of us have ever been.

Braeden: I’ll have a fond memory of going…tomorrow! Haha.

Nothing Happens, the debut, came out earlier this year. Tell me more about the creative process.
Cole: So basically, it’s been the three of us making music under different names for the last ten years or so. We started when we were twelve, and now we’re all 22, 23. So, I feel like a lot of the record is inspired by our experiences of growing up together. It feels very nostalgic and reflective on all of those teenage years, and leaving your youth behind. It feels good to finally have it out, because we’ve been sitting on some songs for ages. Since we were pre-teens, basically.

Braeden: We did it with John Congleton, a producer. We went in there and just fleshed it out with him, built the songs from the ground up.

What did John bring to the table?
Braeden: Honestly a great creative energy. It was great feeding off of him, and it was great to write new parts and songs. Being around him, you just wanna know what he’s thinking about a song, and you really want to impress him by writing something so good.

Dylan: Or, “You look horrible today, Dylan. You can play better. You suck!”

Dylan: If a part just wasn’t good in his mind then he would just say it outright, and that was super helpful for us in having someone we trust just say it how it is.

I’m assuming a lot of these songs were in the work for quite a while. What’s the oldest song on the record?
Cole: I think it’s What You Like. 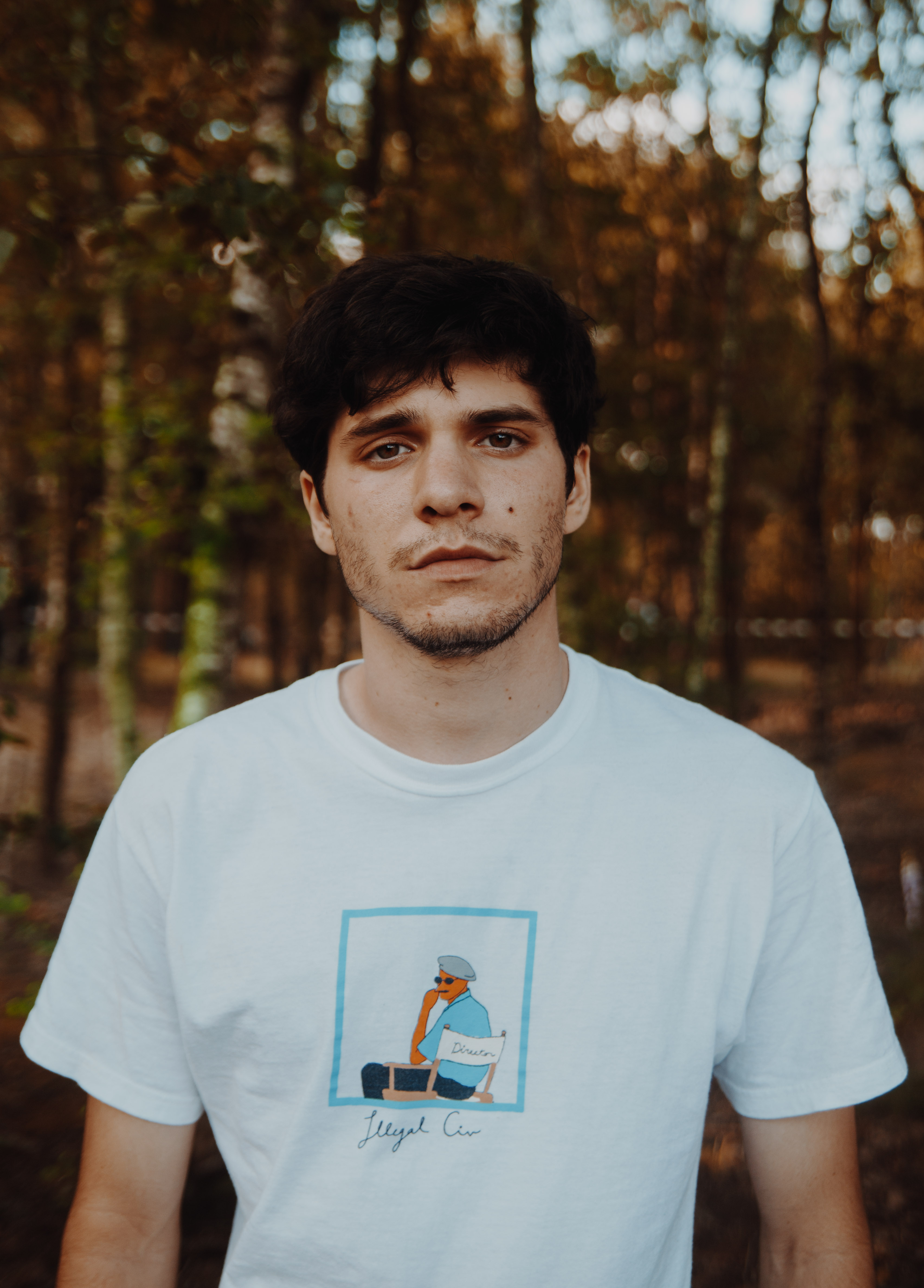 Did it change a lot over the years?
Braeden: No, not really. It pretty much stayed the same, we only made it a bit shorter and that’s it.

Cole: And then we also beefed up the production a little bit and went into the studio with more specific ideas on how we wanted the song to sound. It’s pretty much been the exact same song since its inception, though.

Do you draw any inspiration from films?
Braeden: You know, I usually tell people that I don’t like movies, but I was literally just lying. I mean, I wasn’t lying when I said it, but I realised that I actually love movies.

Dylan: We had to remind Braeden that he really does like movies.

Dylan: I could list 25 movies that he’s seen recently that he’s loved.

Cole: The last movie we saw together – all three of us – was Eighth Grade. Or no, it was Endgame.

Dylan: Yeah it was Endgame.

Braeden: It’s not often, but there’s two or three movies which have inspired the music. Which are Call Me By Your Name and Ferris Bueller’s Day Off. Like, the art scene in that film. I watched that scene, turned off the sound and tried to write my own guitar part over it.

Braeden: Yeah, that’s how Pictures Of Girls came about!

Dylan: I didn’t even know that. 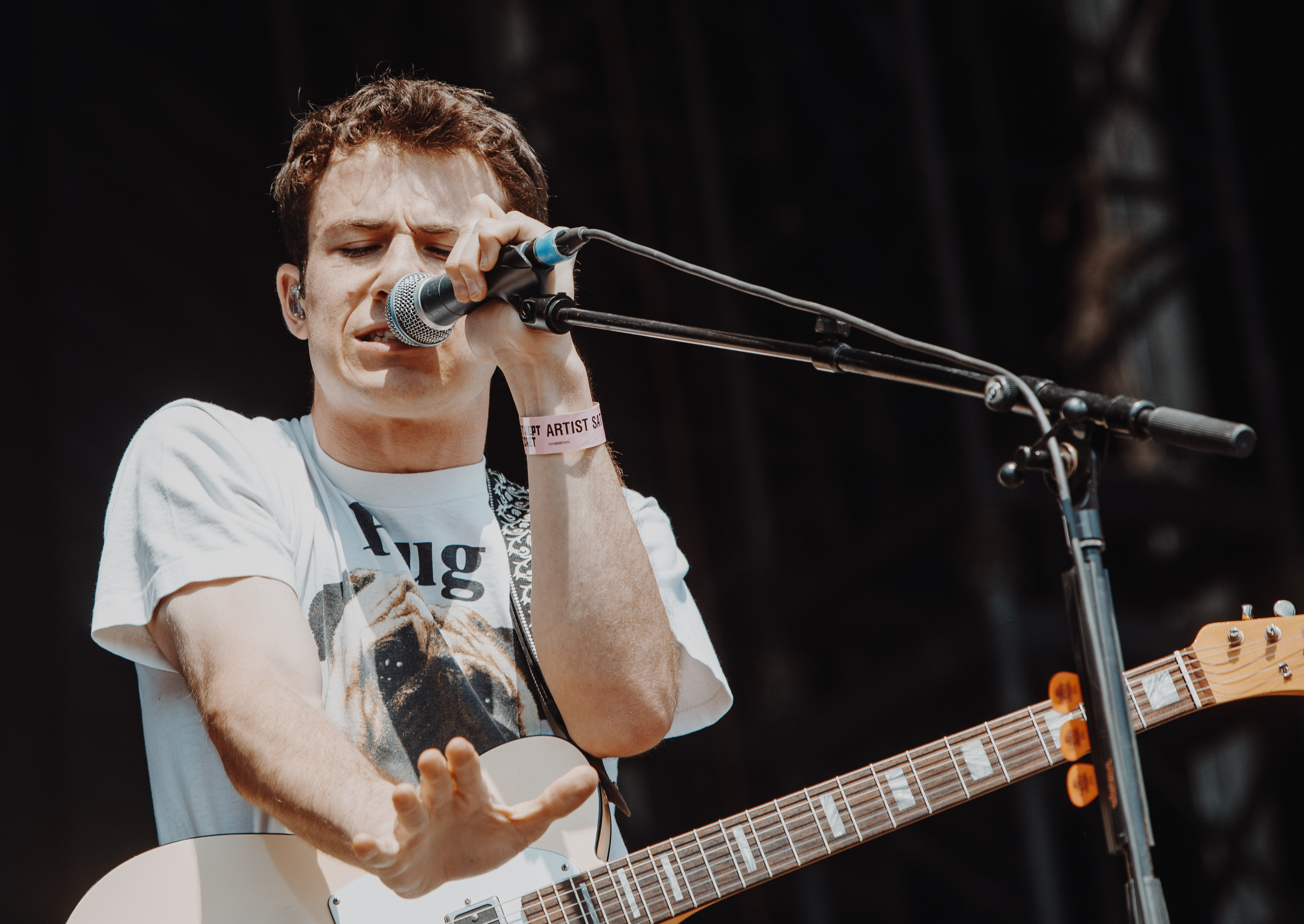 As you just mentioned, Wallows has been around under different names for around ten years now. You started the band when you were quite young, but in the last couple of years it’s really picked up the pace and gotten somewhere good. At what point did you think, “Wow, this can really become something”?
Dylan: I still never allow myself to think that it might explode one day. That would be cool, but I don’t know. We were pretty shocked when we put out our first song, that went so fast and then we got all these emails from label people and industry types. With that first song we completely did not know what to expect; we’d put it out ourselves and had no idea what we were doing. Also, when we put out Are You Bored Yet? that became our most popular song. I would never have expected to make that the lead single on the album.

How did that come about?
Cole: It’s funny. We would not have Clairo on that song if it secretly wasn’t for this artist called Gus Dapperton. He played in Atlanta the night before we did at the same venue, and he left us a little message. Like, “Hey, I like your music” bla bla bla. We ended up hanging out with him at South By Southwest, and met his friend-

Cole: So we hung out with Gus and his friends in Austin, and one of his friends knew Clairo. He introduced Dylan to Clairo on the internet. That would never have happened if it weren’t for Gus Dapperton leaving us a note in Atlanta. Dylan and Clairo became internet friends. We did a demo for the song and had Dylan’s voice pitched up in the verse, which sounded sort of female. We though it’d be cool to have a feature on this bedroom pop-kinda song, and Clairo suited it pretty well. It was a crazy pipe dream which actually came to fruition. We hit her up and she was down.

Have you got a wishlist of sorts for collaborators?
Braeden: Yes.

Who’s on it?
Dylan: We probably shouldn’t say.

Cole: Someone might see it and turn us down.

Dylan: We’d have to keep that to ourselves.

At least Rick would never give you up.
Braeden: Whoah, two more beers for this guy! 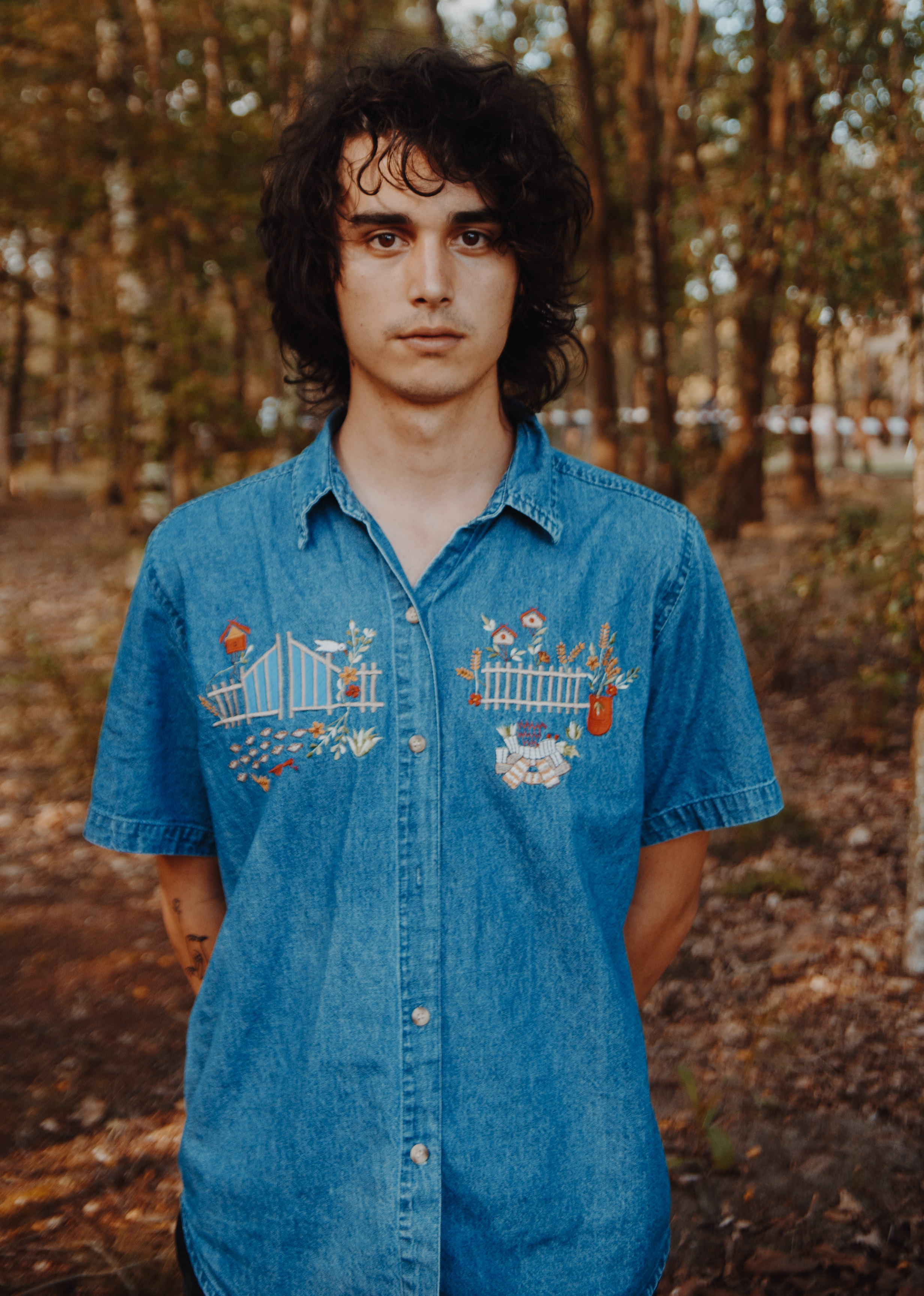 I just want to talk about capturing emotion. After you’ve put together a song for the first time, how do you go about capturing that initial emotion when you have to play the songs night after night? Does it get difficult to recreate that initial feeling?
Cole: I mean, I feel like once you keep playing them there is a sense of repetitiveness sometimes. A lot of these songs are pretty fresh, so we’re still in that stage of the songs where they don’t feel that old yet. We also switch up the setlist to make it feel like everything’s in a different order, which freshens it up a little.

Cole: These songs are still fun to play, though. When we write songs I don’t feel like we have the live show in mind that much at all. In some instances we do, like on Treacherous Doctor. Braeden arranged a couple of things because he thought they’d sound good live. Usually, though, we focus on writing the songs as they are, and then we bring them to the other two guys who tour with us – Blake and Danny, shout out – so that we can actually perform them. Then they take on a whole new energy, which is nice because they then feel fresh when we play them.

How do you cope with the pressures of touring and public attention at such a young age?
Braeden: I eat it up! Haha. I think it’s fun. There’s no pressure for me, it’s very fun to play all of these shows and see all these people on a tour.

Cole: We have very, very nice, sweet, kind fans. For me, the only pressure is feeling disconnected from home. From my friends, from my family, and my girlfriend. There’s no better way to travel, though, even if we only get a small amount of time in each city. It is really cool that I get to experience all these different places while feeling productive at the same time.

Of course. And if it were to all end tomorrow, what would you take away from the experience?
Dylan: I’d take away the fun experiences, I guess. I don’t know.

Braeden: I would just start a new band.