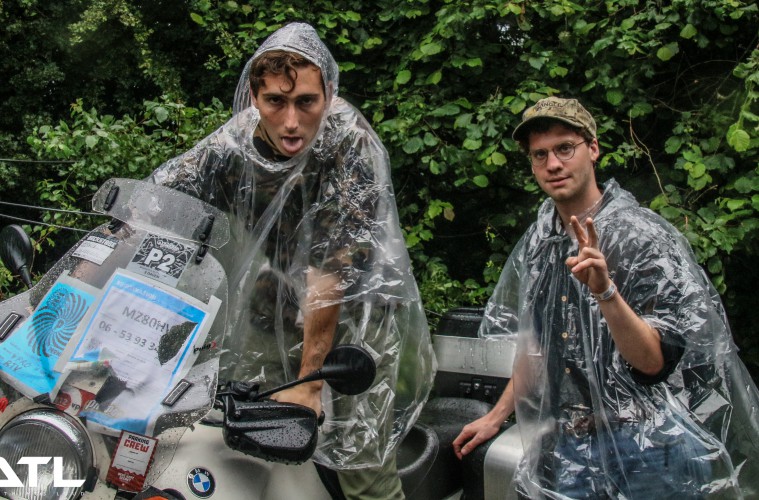 Whitney Talk Us Through Their Debut Record

Summer soundtracks don’t come sweeter than this. At the start of June, folk pop collective Whitney released stunning debut album Light Upon the Lake to mass critical acclaim. The group have been hammering away at the record since their 2015 formation, having formed from the ashes of the Smith Westerns. We sat down with head honchos Julian Ehrlich and Max Kakacek following their sublime set at Down the Rabbit Hole as they talked us through Light Upon the Lake’s ten tracks.

NO WOMAN
Julian: “No Woman is the first song. We wrote it towards the end of the writing process actually. We’d gone through a pretty long winter of being cooped up and not being very productive, and then once the sun came out in Chicago we started on it. I woke up with the hook in my head and sang it a bunch of times to myself, and then we went to our band practice as we had a show later; I started singing No Woman and then Max played the riff and we started jamming out on a krautrock beat. After that, we went back to our apartment and worked the verse out immediately. Max played one chord, then I played one chord and so we basically came up with the chord progression together. Over the course of three days we finished the song.”

THE FALLS
Max: “The Falls was written right before No Woman. It was the whole band jamming in the basement; when we started playing it just came super naturally.”

Julian: “The melody and chords came about in like fifteen minutes, and then we spent two weeks figuring out the actual chorus and lyrics. We were still in this weird slump, and I had phrasing which I wanted to use. We had to actually figure out the lyrics and stuff first, though. When that happened it was very collaborative. The Falls didn’t get completely finished until we played it live once with the band, which is when we realized exactly what the lyrics should be.”

GOLDEN DAYS
Julian: “We had written the first two songs on the record very quickly, and didn’t even think too much about what the lyrics were gonna be or anything. When we started to write Golden Days, Max came up with the initial chord progression and we both realized that it was so good. In a weird pop way I felt like we were getting away with something. Because the chord progression was so good I thought to myself, “damn, how can I capitalize on this and get the most out of this that I possibly can?” I stayed up all night, and the next day I brought to him what I had and it was the melody. Golden Days was the first song that we really laboured over, and it was when we realized that we were onto something much bigger than we could have ever done. Like, bigger than anything that was inside of ourselves. The first line that was really solidified in the song was, “those golden days snuck away from us”. I showed that to him and he was like, “holy shit”, and we kinda pieced together the song after that. I remember coming up early on and singing, “it’s a shame I can’t get it together now” and Max thought it was a weird line, but I said to him, “trust me, that has to be the line”. It ended up working out.”

DAVE’S SONG
Julian: “Dave’s Song was the first song we ever wrote for Whitney.”

Max: “We were really hungover and the song kinda started out as a joke.”

Julian: “We were really just joking around, we didn’t know that we were making such a thing which would kick-start Whitney in such a way that we got to the point where we’re at now. I think that it’s perfect that we wrote it in such a laidback mind-set, and I don’t think that we’re slacker rock or anything but we really did write the first song in a very Namaste mind-set. We weren’t trying to create some band that was gonna take the world over, we just wanted to make music that we wanted to listen to. It was very easy at first, but it definitely got more laboured over afterwards.”

LIGHT UPON THE LAKE
Julian: “Light Upon the Lake was the last song that we wrote on the record. We’d written so many songs about transition, break-ups and band break-ups, family members passing, a lot of intense emotions. Initially I wrote the melody and chord progression for that song and sent it to Max, and the first two lines were, “I went out today, light upon the lake; lonely haze of dawn, when old days are gone”. I sent him that as a voice memo and we ended up changing the first line I think. It just seemed very fitting with the perspective that the song was written from. “Damn, we’ve just gone through a big transition in our lives”, and for some reason the image we’d created ended up with me sitting and staring at a lake. Often when you stare too long at something in life you end up intensifying it, and that’s what that song was. It was very clear that we’d finished writing the album, and we were finishing it from a unified perspective where we could see the whole intensity of it all.”

NO MATTER WHERE WE GO
Max: “No Matter Where We Go started off with a bunch of guitars, and the demo is super guitar-driven. It was the third song we wrote for the record. When we got to the studio we took most of the guitars out and Jonathan Rado (producer, Foxygen) just started playing the piano part that’s on the record. We reformatted the song around that, and it was a lot of fun to change.”

Julian: “We knew that we had a pop song on our hands, and having Rado come in with piano made the song actually fit in on the record. We knew that we loved the song, and Max’s guitar parts were amazing, but having it piano-based was something that we weren’t even able to wrap our heads around until Rado sat down. That made it so special to us. I remember that Rado sat down and played the piano part, and that Max and I were just laughing our butts off literally in awe of the amount of space that he took over on the track. The demo had distorted guitars and stuff, but that’s not really what our band is about. That’s not what our band is about, so it was really nice to have an outside perspective come in and overhaul the song.”

ON MY OWN
Julian: “We made On My Own in the morning in like twenty minutes, and the rest of the day we were just walking around Chicago on what was one of the first temperate, warm days of the year. It was barely hot, but we’d gone through such a tough winter that we just walked around Chicago in light jackets and listened to that song for, straight-up, fifteen hours. We got really fucked up, took molly water and listened to On My Own the whole time. It was the second song that we wrote, so we were kinda experiencing this weird adventure. I couldn’t even believe that we’d made that song, because we were so happy with it. We just listened to it all day in all sorts of mental states. We re-recorded it for the album, so I feel like we did a good job.”

RED MOON
Julian: “Red Moon was the instrumental that we did.”

Max: “It was really just improvised in the studio.”

Julian: “Max is playing bass, I’m playing drums, Will’s playing horns and then Rado’s on keys. It was the first time we worked with Will, so we hung out, recorded some takes, got stoned, recorded more takes, and I think we took one of the takes from after we got stoned but I don’t really remember.”

Max: “We were definitely stoned.”

Julian: “I think so. We were stoned for a lot of that.”

POLLY
Max: “Polly is the most dynamic song on the album.”

Julian: “Polly is a demo from after the Smith Westerns broke up. Max and I had gone off and done other things. I was doing solo stuff with another guy, and Max was doing solo stuff pretty much on his own. I was coming in and working with him a little bit, but Polly was just a chord progression he had from his solo stuff. One day, after we made a few songs together as Whitney, I found it on the computer in our apartment and I wrote the whole vocal intro because I was excited. Max and I just finished the song after that. I remember showing it to Max when he get home and he was just laughing like, “holy shit this is awesome”. We wrote the whole song and realized to ourselves that something really heavy needs to come in during the instrumental part of the chorus when everything picks up. We realized that horns were the mood, especially trumpet. From a friend of a friend we got connected with Will, who’s our trumpet player now, and he came through and played the horn parts that we had written for it. At the very end we were like, “we don’t know what’s gonna go here, but the track is pretty horn-based” so we asked Will to play a solo which he did. He then played a second one, so we cut and pasted them both and realized that it was the best thing to fill the space at the end with. Immediately after that we asked him to join the band, and he said yes.”

FOLLOW
Julian: “This one is about my grandfather dying, and it was in the middle of the weird transition that we were having. He had cancer so many times, like eight or nine times throughout his latter years, and the song came around a weird time where Max and I had both lost our apartments and were in the middle of writing this record. By circumstance we had to go to Wisconsin to Max’s parents cabin because we didn’t have anywhere else to stay. I had written the initial chord progression and I had the melody to it, so when we got to Wisconsin we workshopped it pretty hard and finished the lyrics after that. It became Follow, and a week later I went to my grandfather’s funeral. I gave the song to my grandma, and she played it over the loudspeakers for a group of 300 people that had known him throughout his entire life. It was a really intense moment, I don’t think I’ve cried that hard in my whole life. It was great to be able to do that for him, he was the hardest working man I’d ever known.”

Light Upon the Lake is out now via Secretly Canadian.