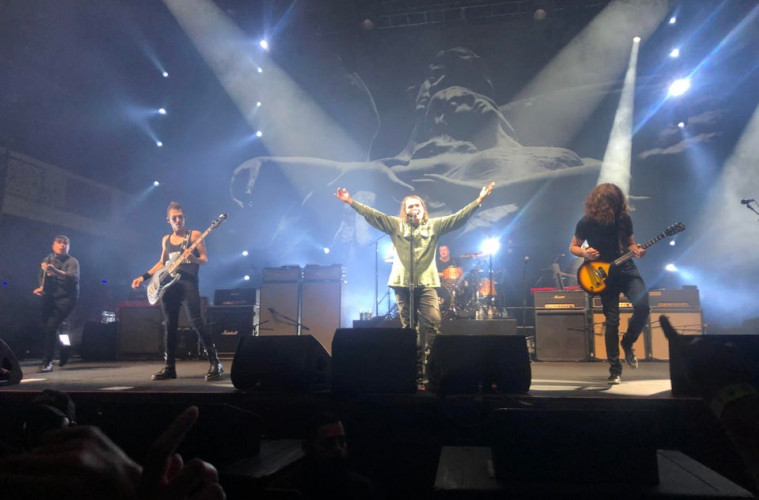 My Chemical Romance have returned to the stage for the first time in seven years.

Last night, Gerard, Mikey, Ray and Frank reunited for a very special headline show at an absolutely jam-packed Shrine Auditorium in Los Angeles, treating more than 6,000 fans to a greatest hits set well worth the wait.

Demand for tickets was, as you’d expect, very high, with hundreds of thousands of the band’s dedicated fans eventually resorting to an assortment of live streams media outlets and fans put on throughout the night. At one point, outlet AltPress were streaming part of the set to over 20,000 fans. All Things Loud weren’t present in Los Angeles, but thanks to the power of social media we’re able to give you a short rundown of the night.

The show – which featured guests Thursday – spanned some twenty songs, taking in highlights from across My Chemical Romance’s vast back catalogue. A massive kabuki towered over the crowd, leading into an intro medley which made way for triumphant opener I’m Not Okay (I Promise). A perfect way to set the bar on a night which was never going to be anything less than 10 out of 10. No amount of light banter from Gerard Way was going to take away from the sheer power of the music everyone came to hear.

The rest of the night had something for everyone, from deep cuts Thank You For the Venom, Summertime and Make Room!!!! (experiencing its live debut) to ultimate fan favourites House of Wolves, Mama, Teenagers and Vampire Money. Seminal album The Black Parade featured most, seven of its track passing through alongside six from 2010’s Danger Days: The True Lives of the Fabulous Killjoys. Five Three Cheers For Sweet Revenge tracks featured as well, including the dark Helena.

Although the set was an ultimate treat for fans from each and every era of the band (whether you like neon or black), there was one song which couldn’t have missed out: finale Welcome to the Black Parade. Undoubtedly their biggest track, it sent Los Angeles into an eyeliner-filled frenzy which tasted of so much more. This was more than just a reunion show, but the start of a resurrection. The band are happier than ever, and it showed (even through a screen).

So what’s next for the band? If what we’re lead to believe is true, then it’s a new album and selected live shows in 2020. On the cards? As yet unannounced trips to Rock Werchter, Mad Cool, Coachella, Lollapalooza and Milton Keynes, plus shows in Australia, New Zealand and Japan. The rest, as they say, shall unravel itself at one point or another…

No review will do the night justice more than video footage. Enjoy clips from the show below.