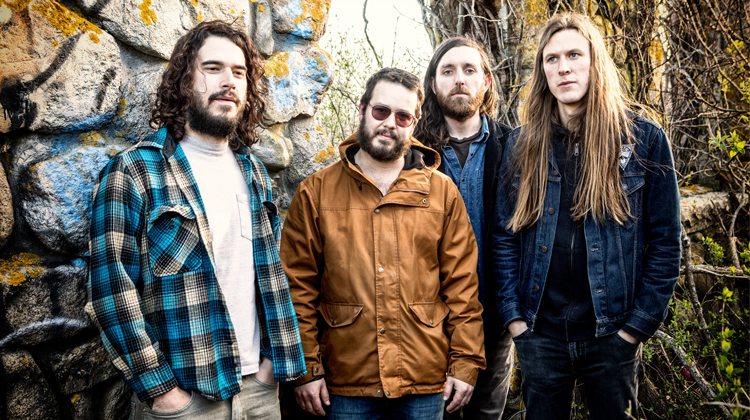 New York psychedelic blues trio King Buffalo and Massachussetts’ Elder both took on Haarlem’s relatively packed Patronaat earlier this week with their hypnotic riffs and beautiful projections. Serving as the penultimate show on the Spring is for Psychedelic & Stoner tour, both bands made sure it was a night to look forward to.

King Buffalo kicked off the night with Orion‘s contrastingly heavy and slow riffs, with it also serving as the title track from their 2016 debut album. Bass on the right, guitar on the left and a dead center, highly raised drumkit laid fire to the crowd with their increasingly heavy music. Repeater & Kerosene followed, offering the crowd a varied mix of everything they have to offer as a band, slowly drawing them into a psychedelic heaven which this evening would offer. Goliath also featured, drawing the crowd into a hypnotic trance, with slow head bobbing and lots of fixated eyes full of wonder of how Sean meticulously played his fuzzy guitar. Ending on arguably their most intriguing song, Drinking From the River Rising, King Buffalo made for an absolutely fitting support for what was about to come – Elder.

Mythical psych legends Elder emerged as a true surprise. A beautifully projected display of neon red, green, purple, yellow and blue appeared mixed in with mountains, crashing waves and intricate geometrical shapes. It lit up the stage as they opened with Sanctuary, the intricate first track on last year’s Reflections of a Floating World. Following this, they a classic off of their debut album: Dead Roots Stirring. A great blast from the past subsequently followed on the intense Lore, the Legend, which clocks in at a hefty 12 minutes and 31 seconds. It made for a huge turning point in the show, leaving the crowd utterly hypnotised by its exceptional guitar & bass work, as well as the accompanying visuals. Blind and Compendium followed, both songs which largely really on bass-heavy instrumentation that hits you right in the midst of your soul. Elder ended the show with what is unarguably the grandest song on Reflections of a Floating World: The Falling Veil. It’s a multi-part track filled with temp and riff changes which can entrance the nerdiest prog metal fan just as much as your next laidback metalhead stoner. However, Elder weren’t done just yet – as the crowd begged for more, the band became eager to deliver. They well and truly ended on their ‘hit’ Gemini, the most renowned track on their discography. The whole crowd went wild, headbanging to every little intricate drumbeat which echoed through the Patronaat’s sweaty main hall. Awe inspiring. Sébastien “this isn’t one of my best reviews” Gamez.