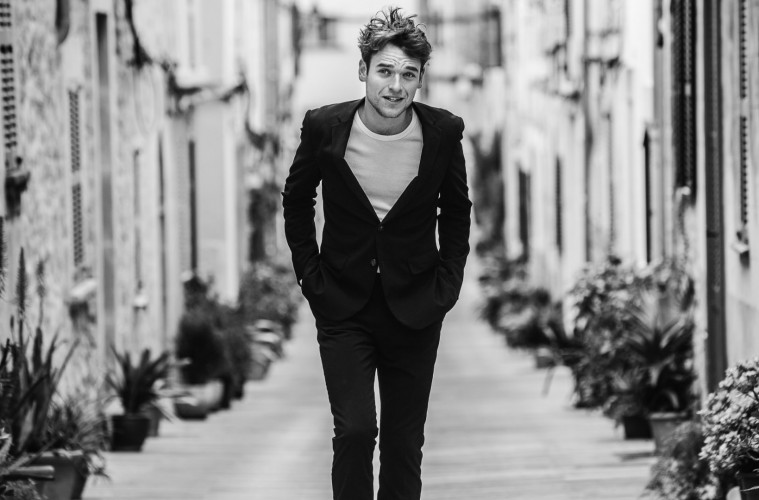 Emil Landman on the Stories Behind His New Album

Some may say that travelling is the best source for inspiration, and you couldn’t really blame them. Whether it be a quick weekend away or an extended trip abroad, inspiration tends to hit you from all four corners of the earth. This couldn’t be truer for Dutch singer songwriter Emil Landman, whose new album An Unexpected View is the end result of months and months of travelling to the world’s deepest and darkest corners. We called Landman up as he handpicked some of the most noteworthy songs on his new record, giving us the lowdown behind his travels across the world.

Closer
There’s a couple of places that really stuck to me. Closer is a song that I wrote in a capsule hotel in Kyoto, Japan. The trip was in the autumn, and the autumn in Japanese is so beautiful with so many colours everywhere. The different shades of red on all the trees, for example, are so beautiful. I spent a whole day there walking around and seeing things, before I ended up in the Nara Park, which has a large wooden Buddha. All the Deer’s in the park are considered to be sacred, so they are left to roam free. The deer are so used to people hanging out that you can now buy little biscuits to feed them. The capsule hotel was very, very small, so I couldn’t sit up straight; I was arching my back whilst recording little bits for different songs, and Closer just came to me. It didn’t take long to have a solid demo for it, as it was just something filled with so much joy. After visiting Kyoto and Tokyo, I went to Los Angeles. From that moment on, I knew I was close to going back to Holland. There, my perspective changed and the lyrics became more personal.

Underneath the Same Stars
Underneath the Same Stars is one of the smaller songs on the record, and it was written in Mongolia. The train stopped in Ulaanbataar and a guy picked me up to bring me to a nature park. He put me in a weird tent, and there was nothing around apart from grass and mountains. My tent has a wooden stove and a bed, but there was no electricity and no shower. I was there for a couple of days, and it gave me some room to play around. There were lots of dogs and cats playing around, and every time I turned on the stove and opened the door they would come running in. I spent a lot of time getting them out of the tent in a playful manner; it was just filled with joy. One night, I went to the toilet really late and looked up to see a sky filled with bright stars. I stood outside and it just hit me, so I walked back in and pretty quickly wrote a song. It felt super nice to be so isolated! You get there and after a day you’ve seen all these amazing things, and then the weirdness starts to numb down. You have no phone, laptop or battery and things just go on for a lot longer than they do when I’m home. I spent an afternoon riding horseback through the Mongolian mountains, which was really nice.

Have the Sun Shine on Us
When I was in New York City towards the end of the trip, and I was staying in an AirBnb in Brooklyn. A friend of mine from Chicago joined me on the way there, but I didn’t know it was her birthday as she didn’t say anything. Mongolia had already been a while back, and she brought a camera with her. We went to our roof, which was a cool roof terrace with couches, and filmed a video for Underneath the Same Stars. It was pretty cold, so we did thirty takes throughout the day, starting early and ending late. We cut 2 seconds or so from each take to combine into one video. I spent a whole day playing that song over and over, and the sun started shining halfway through the day. You really feel it when the sun hits you, so you just absorb it. You get the chills. I was toying around with my guitar between takes, and that’s where Have the Sun Shine on Us originated. Later that day she told me it was her birthday, so I took her out to dinner. The next morning we celebrated that a little bit, so those two songs are linked.

Our Bodies
Our Bodies was something that I started working on pretty early with the guitar drone. I was playing that for a while during the beginning of my trip, and I thought it was an interesting pattern to play. It took a while for the track to take its form, and that happened in a Chinese hotel room. I was just thinking about the repetition of this one thing, and in my mind I was playing it for ten minutes at a time without it withholding me from being intrigued. Around that time I was figuring out how to write a song that never changes in its guitar part, which took me a really long time. I eventually decided that this was going to become a song. It’s not a cohesive story, but the song came about bit by bit.

Make Me Feel So Good
This song was written in a little town on Russia’s Lake Baikal. It was actually my birthday on that day, and I spent the four days before that in a train from Moscow to Irkutsk with no showers. You just sit there for four days. When I got there, a Russian guy called Yuri took me too Listvyanka, a village where lots of fishes live. There’s one fish which only lives in that lake. On my birthday I got to a warm wooden cabin, and I received all these birthday messages. People had hidden gifts in my backpack, and then the lady of the house asked me if I was Emil. She came out of the kitchen with a cake and started to sing Happy Birthday to me in Russian, and that just filled my heart so much. Combine that with not showering for four days, showering, sitting down and looking between two mountains – wow. I wrote that song in, I think, two hours.

Perfect Wave
The thing is, I’ve made some footage and we sort of made little things for all the album tracks. From the period that I was in LA, that stopped. Perfect Wave was done by the time I got to Los Angeles, but the footage we used of me is from walking along the Great Wall of China. I’m not so sure where it originated, because it was basically nine weeks of travelling and making music. They start and end in specific time frames, with Perfect Wave probably originating just before I got to LA. That’s where I met up with some old friends, and we started toying around with that song and that’s sort of how it went. It made me think about the time that I was in Japan. There’s this place in Japan next to Mount Fuji which was really pretty, and there’s a little village there where I spent a couple of days. The hostel I was in was playing In Rainbows by Radiohead, and the people who were there asked me what I was doing. I told them I was making music, and they said that while all their guests were out I could turn the hostel into a mini studio. I started working on the chorus, and when the sun broke out I saw the top of Mount Fuji. I ran out towards the mountain and hitchhiked up as high as I could; when I was in LA, I was thinking about that a lot. Being in Mount Fuji, I saw clouds and rainbows all around me. It was almost a half-religious experience.

These are all fantastic stories, but how did you end up everywhere?
There’s a route from Amsterdam to Beijing which multiple people do, and you basically just go out of your way to see all these places. For example the Russian stop is pretty well known for that trip. If you go to Mongolia, the trip from Moscow takes I think five or six days with the train. From Moscow to Irkutsk it’s another four days, but you can then buy tomatoes and eat that the whole time. On these trains you can buy noodles, but for the rest you have to bring your own food. It creates a nice atmosphere. It’s long, but then again it’s also nice to experience. People go to all these places and you can then choose where you want to hop on and hop off.

An Unexpected View is out tomorrow (21 October) via V2 Records.