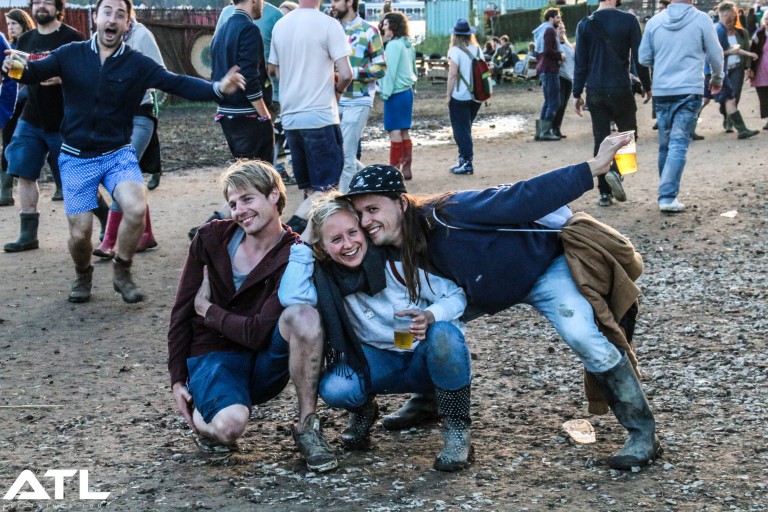 There’s always a light at the end of the tunnel, something which one quarter of Down the Rabbit Hole’s early leavers didn’t realize when they headed off prematurely in avoidance of predicted thunderstorms. Those thunderstorms didn’t show up; instead, festivalgoers were (after a small shower) eventually greeted with a warm sun and some absolutely stunning performances. The day reached an end by means of a thought-provoking headliner (Anohni), with the likes of DMAs, MØ and Nothing But Thieves also featuring.

Scottish indie rock outfit Frightened Rabbit kicked off the day with a gloomy set on the Fuzzy Lop stage, pulling a reasonably small crowd (in line with most other shows that day) as they pulled tracks from new album Painting of a Panic Attack out of the metaphorical bag. Frightened Rabbit are by no means a fun or uplifting live band, however their set was more than enough to tie people over at the start of a successful final day. Ghanaian afro-funk forefather Pat Thomas and his Kwashibu Area Band opened the Hotot stage not to soon afterwards, bringing some much-needed party vibes to Beuningen for a solid hour of groove-laden afro-funk and rock ‘n roll. Performing in front of a colourful visuals screen, Thomas and his band expressed nothing but fun and extreme enjoyment as they energetically bounded about the stage in front of a half-full tent. The lack of crowd didn’t matter to the band whatsoever, though; they enjoyed themselves to the fullest and made sure that Down the Rabbit Hole received the warm African welcome it had been waiting for.

Back on the Fuzzy Lop stage, Car Seat Headrest presented Beuningen with their critically acclaimed new record Teens of Denial. The album encompasses long slow-jams filled with angst, grit and tenderness, all of which could’ve been declared missing throughout the show. Sometimes lots of hype can still mean nothing when the time to prove yourself comes, something which was unfortunately the case for Car Seat Headrest. Back on the Hotot stage, indie rock darlings Nothing But Thieves performed one of their biggest Dutch shows to date as they continue to tour their successful self-titled debut. Frontman Conor Mason may have played more than 100 shows in the last years, but it’s not affected his absolutely spectacular voice whatsoever. Set opener Itch encompassed huge choruses and manic riffs, before the groovy Hostage and funky Honey Whiskey followed suit. You can definitely hear that the band have grown tenfold throughout the last 18 months, seeming like a whole new force to be reckoned with compared to when they first started out by touring with Gerard Way and AWOLNATION. Their touring partners have now escalated to the likes of Muse (who took them across Europe in March), a band whose influence has definitely rubbed off on the quintet. The tracks sound bigger than ever before, and everything only seems to be getting better. Set highlight If I Get High put Mason’s voice on a pedestal in front of 7,000 baying listeners, with show closer Ban All the Music throwing some more chaos into the mix. Give it a couple of years and another record and you could definitely see Nothing But Thieves headlining a festival like Down the Rabbit Hole.

Over on the Teddy Widder stage, Bosnian outfit Dubioza Kolektiv ensured that the warmest time of day was also met with the hottest party of the weekend. Unlike Catalan counterparts La Pegatina, Dubioza Kolektiv like to ensure that they make a visceral statement whilst hosting a massive party. Dressed in matching yellow football shirts, the Bosnian maniacs ran around stage energetically as traditional Balkan segments were interspersed with hints of dubstep and electronica. It’s an interesting combination, but it certainly works well on paper when you throw confetti and such into the mix. Dubioza Kolektiv are the politically-charged party band which planet Earth never knew it needed. And in dire times like these, political messages could use a bit of fun to send a point across. Daughter followed the band on the same stage, performing tracks from the subdued and beautiful Not to Disappear, which came out earlier this year. Set opener How was a beautifully tragic mixture of subtle verses and majestic choruses, with standout track Smother soaring serenely through the Teddy Widder. Daughter only have two records to their name, but they’re currently pressing all the right buttons and heading straight to the top.

The Brett Anderson-fronted Suede had the honour of sub-headlining the Hotot stage, however they fell victim to something which almost every band experienced that day: a low turnout. Throughout Saturday night and Sunday morning, some 4,000 people left Beuningen for their homes, meaning that the festival site seemed far quieter and less bustling than on the two preceding days. Not that this stopped Suede from giving everything they had, though. Set opener Europe Is Our Playground may or may not have been a subtle hint towards Friday’s controversial Brexit outcome, with Anderson flamboyantly bounding around the stage as he interacted with the crowd in a way which not many other frontmen do. Popular cut Animal Nitrate appeared early on in the set, one which ended on rousing rendition of the menacingly good New Generation. Suede themselves may not be part of that generation, but their 90s legacy still lives on and will continue to do so for years to come. Danish vocalist MØ followed immediately on the Teddy Widder stage, still riding the huge wave of success which last year’s Major Lazer collaboration Lean On created for her. The track predictable closed out her energetic set, one which proved that she also has definite potential to headline Down the Rabbit Hole in the future. A stripped back version of Don’t Wanna Dance opened the set, with MØ prowling around the stage before heading into the photo pit during Kamikaze. If she plays her cards right then MØ (real name Karen Anderson) could definitely become a megastar in the years to come. All she needs is a solid sophomore album with plenty of hit potential and backing to really show the world what she’s made of.

Australia-via-Manchester outfit DMA’s hit the Fuzzy Lop stage later on, performing tracks from this year’s full-length debut Hills End. As per usual, Tommy O’Dell and co. were on top form as their Madchester vibes echoed through Beuningen’s smallest stage. Set highlight Feels Like 37 made for one of the best moments of the whole weekend, with the emotion expressed by O’Dell nearly palpable. Give them some time and they’ll be able to perform in front of packed crowds twice this size in Europe as well as back home in Australia. Now, it’s hard to explain Anohni’s somewhat controversial headline set. Whereas many hailed her Hopelessness show as a visual spectacle courtesy of the transgender vocalist (formerly known as Anthony Hegarty of Anthony & the Johnsons), others decided to avoid the Hotot and leave it half-full as Anohni (alongside accomplices Oneohtrix Point Never and Hudson Mohawke) brought her visually brooding and musically haunting new album Hopelessness to Beuningen. It was a tough show to watch, with Anohni’s lyrical musings ranging from drone bombing (Drone Bomb Me) to political instability (Obama). Had the show been placed on a different stage later in the night, then maybe it would’ve come across as more impressive and visually pleasing, something it just didn’t achieve. Instead, the show did its best to challenge your senses by means of a huge video screen which projected women singing along silently with Anohni, who was dressed in a full black cloak from head to toe (face included). At times, it seemed as though the show was more about the screen and less about Anohni, who at times seemed almost invisible onstage. However, maybe headlining Down the Rabbit Hole just wasn’t the right slot for her to appear in at all. Tame Impala were initially lined up to appear at the top of the bill, with Anohni merely a late replacement for what could’ve been one of the best headliners in recent history.

The rest of the evening featured sets from Fun Lovin’ Criminals (who, almost criminally, started 30 minutes late) and White Denim, both of whom slowly but surely enabled Down the Rabbit Hole to reach its end for the third time. Compared to previous years, you could definitely suggest that the weekender has taken a massive leap into the public eye by expanding to 20,000 solid visitors all weekend long. Pair that with big headliners (PJ Harvey, The National), huge crowd pleasers (Flume, Courtney Barnett) and the best new bands (Whitney, Nothing But Thieves) and you’ve got an absolute winner on your hands. The weather may have slightly marred it for some people, but for most it was probably the best festival Holland had to offer this summer. And quite rightly so, because Down the Rabbit Hole is here to stay.