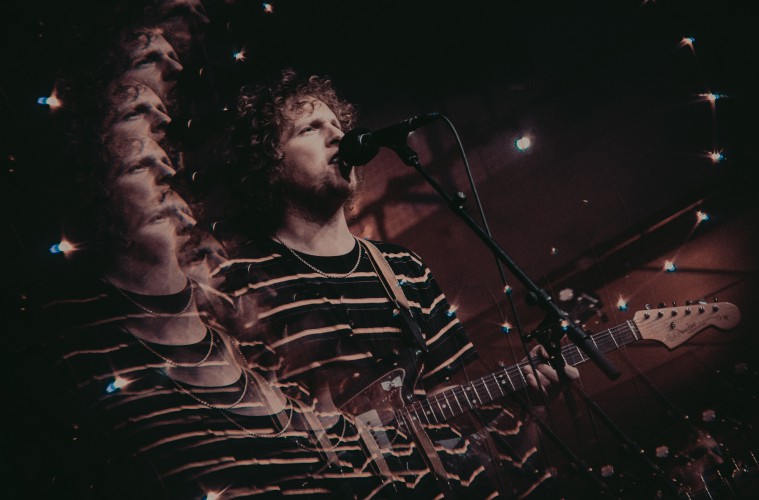 Iguana Death Cult. Such a brilliant name, right? Thankfully, the quality of this Rotterdam quartet’s frantic protopunk matches the brilliance of their moniker, something not every band out there can be equally proud of. We called up frontman Jeroen Reek to discuss his band’s upcoming appearance at The Great Escape in Brighton this weekend, as well as their elusive second album and in which way(s) they perceive operating on a DIY level within their music.

Hey Jeroen. How are you?
Yeah, fine! I’m currently on the ferry to Dover drinking coffee and reading a book. We’re playing in London first tonight before we go to Brighton for The Great Escape.

What are you reading?
Against Nature by Joris-Karl Huysmans, which I borrowed from a girl in Brighton. I had to read it and give it back, haha. Let’s talk a little bit about the DIY lifestyle. How do you envision it within your own music?
Well, we just really like to keep control of everything we do by doing it ourselves. We do get a little bit of help, but we record our own records. That’s all, really.

Your band Iguana Death Cult will appear at The Great Escape in Brighton this week. What can we expect from these shows?
They’re going to be cool shows. We’re going to play some new stuff, but I guess that most of the people that will think everything is new. We’re going to showcase some of the new material which presents a clear image of the direction we’re going in on our second album.

What’s the main difference between the two albums?
First of all, I think that the production is going to be better. It won’t be as lo-fi as the first album; it has a more layered sound, and we’re sort of shaking off the whole surf vibe. Not that I want to say 60s, but it won’t sound as 60s anymore! The second album also has more songs which just sound and feel like, you know, umm, proper songs. There’s more influence from 70s bands and some stuff from the early 80s, too. I think you’ll be able to hear that. We’re recording it in bits, so we now have six songs from the first two sessions. We’ll be working on four more in July, so it’s shaping up nicely now.

You have relative experience performing abroad, but how important – for you – are festivals like Eurosonic and The Great Escape?
I never really know how important it directly is, to be honest even though it’s always important to play shows and present yourself. There are a lof of industry people at these events, and we do get some shows out of it. You never really know what the impact will be, but I don’t want to sound too negative. At Eurosonic we got a few shows, but there the vibe was different. I really like playing for people who are really there to see you. That’s not really the case at showcases normally, as people are pretty serious most of the time and they listen very carefully. The party vibe is still there at these shows, but it’s tougher to play. What’s the scene like in Rotterdam at the moment?
The scene in Rotterdam has been growing for the last couple of years. We’ve got some cool bands, like The Lumes, Smudged Toads, and Rats on Rafts. Bands from Rotterdam all do their own thing, but there’s a type of sound we all have in common. It’s something industrial. Not like Nine Inch Nails, but Rotterdam is a working class harbour city, and you can hear this greyness in a lot of the music.

How do you see the band moving forward for the rest of 2018? Where do the ambitions lie?
We’re trying to take it easy in terms of playing shows. We’re focussing more on the next album, as it’s the second one and we want it to be really good. We don’t want to make the same album again, we want it to be something fresh and new.

Catch Iguana Death Cult at The Great Escape in Brighton throughout the weekend. Head here for details.