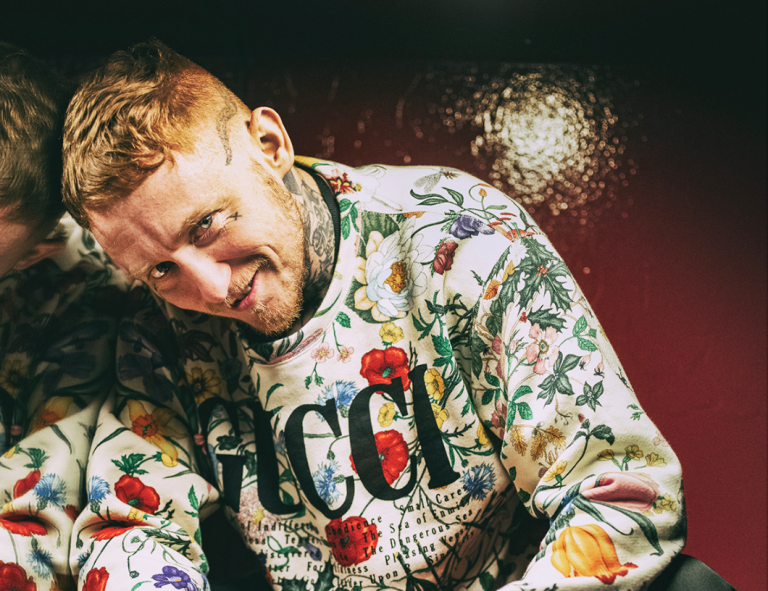 Inside the End of Suffering With Frank Carter & Dean Richardson

Frank Carter is without a shadow of a doubt one of Britain’s most prolific, powerful and enigmatic musicians. The vocalist, who started out with Gallows and Pure Love before officially ‘going solo’ in 2015, has unwittingly found himself at the forefront of a British rock revolution in recent years. Together with his band, the Rattlesnakes, Carter is paving the way for a brand new generation of forward-thinking rock and punk which places just as much emphasis on the importance of the self as it does on the actual music. New album End of Suffering (due 3 May) is a perfect example of this, serving as the band’s strongest body of work to date. Jack Parker called up Carter and guitarist Dean Richardson to discuss the new music, personal struggles and facilitating change. Photography by Hans-Peter van Velthoven in Eindhoven.

You’ve just rounded out an intimate tour of the UK and Europe. How did it go?
Frank: It was fucking phenomenal, and mental. We got to Europe just playing in front of a few hundred people in places like Prague and Warsaw – chaos. It was overwhelming, and we certainly weren’t expecting it to go that well.

Despite the fact that this project keeps growing, you chose to take on intimate venues. What is it about small venues that compels you to return?
Frank: The main reason was that we were gonna start playing new tunes. We come from a world of small venues, and we know what the energy in those rooms is like. For us that was the key, just testing out new tunes and making sure it’s all good.

End of Suffering is the new album, and it’s incredibly strong. It comes almost three years after Modern Ruin. What’s new in the world of Frank Carter & the Rattlesnakes?
Frank: I mean, fuck. Everything’s new, you know? I got divorced, and I went through some savage times. I was lucky enough to have good people like Dean around me who keeps me on the straight and narrow. I did more self-reflection than I’ve ever done in my life, so everything in our world has changed. Added to the fact the band is going well! There’s this direct juxtaposition of amazing and brutally bleak, personal times in the same moments.

The album title – End of Suffering – says a lot. Is this an indication that the record is some sort of cathartic outlet for you, an end to some prior suffering?
Frank: Yeah, exactly that. The whole point is that End of Suffering is a translation of enlightenment. For me, I certainly don’t feel enlightened, but I definitely feel lighter than before. I was watching the suffering I’d gone through, as well as that of what people around me had gone through, as time went on. It’s been a violent couple of years; not literally, but definitely metaphorically.

Dean – tell me more about the musical direction of the album. Did the approach differ in comparison to Modern Ruin?
Dean: No! We wrote it in the same way as we’ve always written music, in that we only ever write with people who like what we like. We don’t worry about what we should be sounding like, or what people think. The direction, for us, is natural and it comes from the heart. In the studio we did do things a little bit differently, as we were a lot more willing to tear things apart and be brutal. This album was a patchwork, and we were free to experiment. It’s the sound of us. What happens next? Who knows?

I just want to focus on two songs in particular: lead single Crowbar, and the almost unsettling When a Butterfly Can’t Love a Spider. Let’s discuss their individual sonic and lyrical directions.
Frank: Crowbar we put out as the first single as it contained the perfect mission statement of our band: trying to explain that it’s okay to be who you are. A lot of what End of Suffering’s about is finding yourself and accepting who you are. Also understanding that people will try to force you into being someone you’re not, and to not allow that. It’s important to break out that as fast as possible; living life by other people’s standards is bad. Musically it’s one of the songs that I found quite simple. Dean was listening to a lot of Motorhead. Not to say that this our Motorhead moment, but it’s just a great rock song.

Dean: People were worried that we were gonna lose that steam or energy, but we just found a new way to deliver it. The whole room still explodes.

Frank: Butterfly… on the other hand is about a toxic relationship where everything seems to be good to be true. It’s also about the fact that we find ourselves with people who don’t fit us emotionally or psychologically, and the subsequent insanity of doing the same thing over and over again, expecting different results. If you’re a butterfly who lands in a spiderweb, you’ll get eaten.

Dean: The music on this one is important – it’s that moment when you realise the power of restraint. We try to give it all, but on Butterfly… we learnt that focussing on the lyrics instead of doubling down on the instruments is also vital.

It’s been a while since Frank Carter & the Rattlesnakes really established itself as a ‘thing’. When you first went down this path, did you ever anticipate it to get this point in size and scope a few years down the line?
Frank: I never anticipate anything, I just work hard. If it connects or not doesn’t matter to me; it’s therapy to me. I will continue to make music forever, and I’m sure it’ll have varying degrees of success throughout my life. It’ll always be passionate, and the people who respect that will stay along the way as it grows. That’s what you want, for your music to reach more people.

And how do you personally cope with the pressures of touring/public attention currently?
Frank: Good routine on the road. We’ve been doing a lot better; I used to fight a lot and not really want to be on the road, but if you accept the current situation then it’s amazing how good life can be. By the time I wake up, Dean’s already at the gym. We’ll have lunch, and then we’ll meet some people. I also do a lot of writing and reading. I’m trying to be positive in life and put myself in the current situation, as opposed to looking into the future or past.

Dean: If I wake up and see that I’m in, for example, Budapest, I straight away wonder what I could do there. It’s the best you could want in life, but thinking too big is the hard part.

Frank: It can be fucking difficult. I’ve got a kid, and Gaz (Grover, drums) has two. It’s hard to be away from family, and it’s really difficult to balance that. My daughter is four now, and I’ve been doing this work for about fifteen years. It’s all I know, really. I just try to strike a balance and make sure I’m as present for her as possible. It’s beautiful, I have an amazing bond with my daughter. I was with her this past weekend and it made me feel really positive about life. I miss a lot of my daughter’s life, but then I walk into the room and it’s like I was never gone. Myself and the mother are raising a happy, strong and adventurous daughter.

You’re a massive advocate of safe environments for women at your shows, and rightly so. As a society we have made some big leaps forward in terms of equality, but what still needs to change or could be done better?
Frank: I think that men in bands need to do more. They need to talk about these issues, and be proactive by creating safe spaces for women and displaying the correct behaviour. It will pay dividends. It’s been amazing for us to watch and be part of that change, but I think that more men need to stand up and create that space as it’s certainly not equal yet. There’s still a huge threat out there, and by creating that space and environment you also create a wider ripple. That’s the important part, as you not only empower women, but also men who then go forward and think about their and other people’s actions. They might see toxic behaviour take place at a future show, and you may have given them enough of a change in perspective for them to address that. In the past, they may have been fearful or ignorant of that same issue. All that needs to happen for evil to prevail is for good to do nothing. We’re here to do as much as we can in order to affect a change which lasts forever. End of Suffering is due this week Friday (3 May).