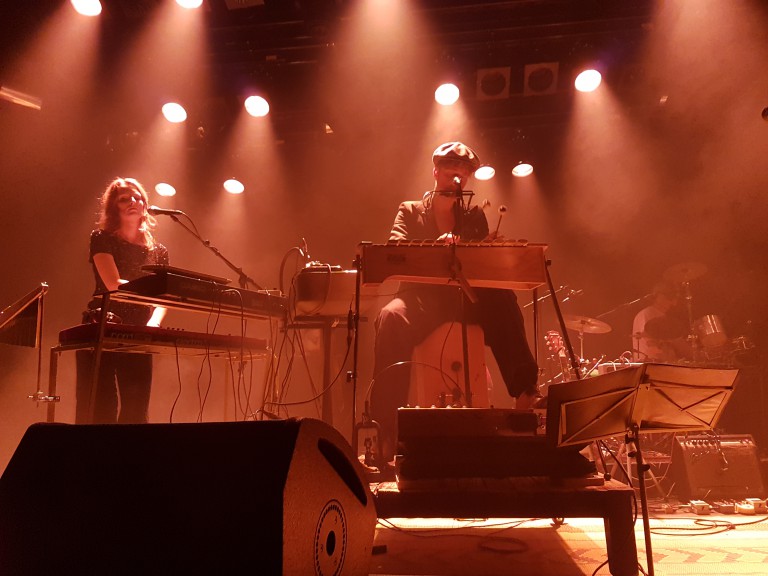 Despite being one of the most creative and exciting bands of the late 1990s, for some reason dEUS never became as popular in the UK as they did in mainland Europe. Though their first three albums were back to back perfection, crammed full of so many ideas, they seemed to be bulging at the seams, and ended up as more of a hipster commodity in Britain. A band you could recommend to someone who has never heard of them and await the shock in their reaction at how good they are.

Stef only featured on the first two of those two albums, leaving before the wild creative streak began to give way to a more mature sound. After that he forged his own path with Zita Swoon, carrying on in the same wildly experimental vain. It was many years after I discovered them that I finally got a chance to see dEUS live in the UK, where I’m from. By then, Stef was long gone from dEUS, but I never forgot his unique vocal style which was a highlight of so much of their music. I always kept an eye on whether or not Stef was coming to play in the UK, but alas it was never to be.

Now I live in The Netherlands, a place where dEUS received the respect they were due. A country where Stef has played many times not just because of its proximity to Belgium but because he’s got a real following here. When I discovered he was playing in my new hometown of Nijmegen just one month after moving here, I knew it was fate. Opening for Stef was Matt Watts, an American now living in Belgium. He released a solo album last year collaborating with the incredibly talented double bassist Nicholas Rombouts, who happens to also be part of Stef’s touring band. All songs on the night, other than a low-key cover of Michael Jackson’s Billie Jean, were taken from the album they had recorded together. It’s a slice of Americana with tender vocals delivered over simple guitar arrangements reminiscent of Bright Eyes at his most personal. Matt sings with a gentle strain that made every note sound as though it hurt to pull it from himself. Despite this, it was hard to see beyond the unfortunate visual resemblance Matt has to pharmaceutical demon Martin Shkreli. When he took a moment before starting his last song, before blaming some LSD he took last week for the delay, I couldn’t help wondering how far this drug link went. There’s something incredibly likeable about the way that Stef Kamil Carlens conducts himself. Before the band started, Stef took to the stage to make sure everything was in its right place, gesturing to the crowd not to clap yet as the show hadn’t started. Shortly after the band stood at the back of the stage, rather than backstage, talking happily and exchanging hugs. There was a contagious contentment between them all. Once they were ready, they turned back around to take their positions on the stage so the real applause could begin. Something about the whole exchange felt so wholesome that before a single note had been played, I had already been won over.

Though Stef may have been the main songwriting force behind Zita Swoon, it’s only on last year’s Stuck In The Status Quo that he released his first solo album in his own name. An album which he recorded nearly all of the instrumentation on himself, but is joined by a touring band to realise the songs live. Between them, they have a wealth of instruments to choose between on stage. Wim De Busser, primarily the drummer, also switches to an Indian harmonium or a Fender Rhodes when necessary. Nel Ponsaers switches between wurlitzer, keyboards or chimes. Even with all of this assistance on demand, for some songs Stef couldn’t resist doing most of it himself. With a kick pedal connected to a Cajon on one foot, a pneumatic bass pump on the other, a xylophone in front of him and a harmonica strapped around his head, sometimes he’d leave little for the rest of the band to do other than to dance. Anyone worried that the material would draw entirely from Stef’s solo album needn’t have worried. Though missing its distinctive riff, Zita Swoon’s Ice Guitars opened the set, the first of over ten of their songs that made their way into the setlist. Every song had been rearranged, whether in a minor or a more major way to incorporate the members of the existing band. Even some of the solo songs have already moved on from their original format. While After I’m Gone ranks as my least favourite track on Stef’s solo album, the subtle changes to its live incarnation make the whole thing more palatable. In fact, the only negative change I can note is the occasional use of chimes, the music industries greatest crime. That may just be personal preference though.

Between the songs, Stef had a lot to say. Unfortunately for me, the things he said were in Dutch, a language I don’t yet speak. It was at this point that I regretted choosing to stand right at the front in the centre. Whether it was the lighting or narcissism, it frequently felt like he was talking directly to me. Being British, the awkwardness of this situation heightened my stress levels to ridiculous levels. What if he asked me a question directly, revealing the fact that I had understood nothing? His lyrics are mostly in English, maybe I could ask him to sing the question to me instead? In the end, all I could do was try to mimic the sounds of those around me, copying the laughter, the groans and the cheers wherever appropriate. Internally I became concerned I may be whooping some casual misogyny or worse, but I trusted Stef’s mannerisms enough to believe he was saying positive things. The tactic seemed to pay off, I made it to the end of the show without being revealed to be the phoney I am. It’s a pleasure watching a band of such talented musicians performing this way. Every time the band synchronised to all sing at the same time, it sent a shiver down your spine. The climax of I’m Going Away sounded phenomenal in its form, the slide guitar mimicking Stef’s distinct voice as he delivered the words with pure raw power. Alma Auer’s voice makes a great counterpoint to Stef’s during The Journey Will Be Long, with his nasal high range being reduced to a far gruffer equivalent as he’s gotten older. This was a band with great chemistry and it reflected well in the music.

For the encore we were treated to Infinite Down and a cover of The Night by the band Morphine. There was another short speech about Morphine that Stef made that featured the word dEUS too. I wish I could tell you what he said, but unfortunately, I cannot. All I know is that when it was my turn to laugh I did what I needed to do, and with a smile wide on my face already, that wasn’t particularly difficult.

Mobile images courtesy of the author.