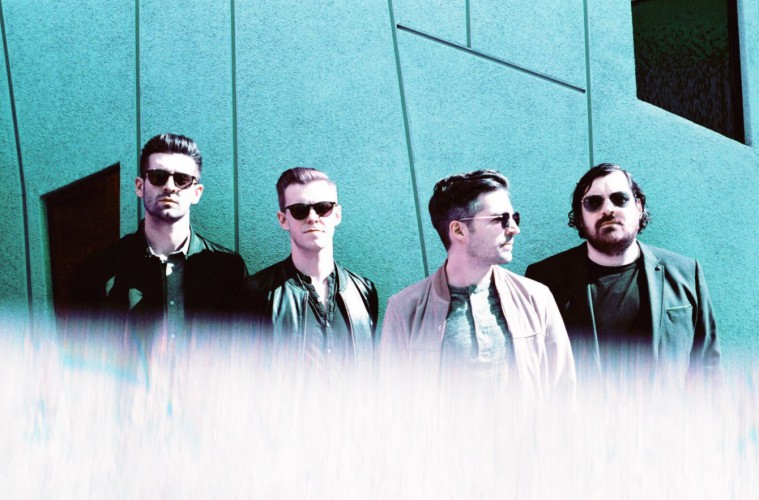 The Boxer Rebellion: “It no longer sounded like Mumford & Sons”

It’s a breezy, sunny day in Amsterdam when we arrive at the elusive A-Lab to sit down with one-half of London-based quartet The Boxer Rebellion. There’s an air of anticipation lurking in and around the building’s complex set-up, which features maze-like corridors and picturesque stairways laced with mosaic windows that look out over Amsterdam’s Ij River. Frontman Nathan Nicholson and guitarist Andrew Smith are sitting in a small booth on the top floor, having just carried out a busy day of press. The band’s fourth studio album Ocean by Ocean is due next week Friday, and we sat down with the pair to find out a bit more.

Did you guys have a long day?
Andrew: Yeah we did, because I got up at about quarter to five this morning to fly here. We’re flying to Berlin after this.

Of course your new record Ocean by Ocean comes out in April. Can you tell us a bit more about the recording process and how the record came to be what it is now?
Nathan: *laughs*

Nathan: Yeah go for it, haha!

Andrew: So we had a year to write it and we produced a lot of it ourselves just by writing and focussing on the different details of it continuously. We wrote about 28 songs or something, so it was a long but focussed period of time which enabled us to have a lot of freedom for experimentation. It helped us be better equipped when we actually went into the studio in Los Angeles. We had all these fully formed songs, and then we took some ideas from Billy Bush who produced the record.

Have you got any plans for the tracks which didn’t make the cut? Seeing as you mentioned 28 songs earlier.
Andrew: Yeah. There are about five or six songs which were recorded well and are in really good shape. They’ll be used somehow, maybe as B-Sides or bonus tracks.

What topics did you draw from on a lyrical perspective?
Nathan: Basically, there’s a lot about relationships and love. That’s what a lot of the lyrics are about. Whether it’s relationships on a romantic level or on a friendship level, or even a “I fucking hate you”-level, it’s anything like that. I don’t tend to think about it, but it’s always about me and you; “this is what I feel about what you’re doing”. I don’t know why, but I don’t really write about an event or something.

So there are no songs which really stand out from an emotional perspective?
Nathan: All the songs do mean something on an emotional level, for instance (album closer) Let it Go. The parting lyric which ends the album is, “I choose to be happy”, and throughout the whole song I say that you have a choice to be happy or sad. That means a lot to me, because I go through a thing which most people go through daily. You kinda think, “I’ve got a lot of things going for me”, and sometimes I think I should be happier than I am. That’s not to say you’re depressed, but that you should be satisfied.

So some of the songs would be sparked by personal experiences then?
Nathan: Sometimes it’s more just choosing a situation and putting our headspace in it. It’s like, “how would I react to that, and how would I feel?” We’re harking back to a certain feeling. The single, Big Ideas, is about meeting somebody in a romantic sense but meeting them at the wrong time even though you love them. For whatever reason, it doesn’t work, but it doesn’t mean that it was a bad experience. Away from the lyrics, did you pick up any particular influences on an instrumental front?
Andrew: Y’know, I remember this song, but I don’t remember the title. It goes a bit like “the music sounds better with you”, and it’s a love song from ages ago. That little riff, for instance, got stuck in my head when I was a kid. I remember going on holiday to Ibiza with my parents when I was nine years old and hearing that. One little guitar part which became the dominant riff in a song called Firework was based on that. The song was initially sounding good, but maybe it just missed something. We were just experimenting in Los Angeles in Billy Bush’s studio.

Nathan: Are you saying we ripped it off?

Andrew: So it was something like that, and it got stuck in my head. That little riff seemed to fit right there. We were writing in London, and when we had access to other instruments and effects, percussive ones for instance, they were all of a sudden capitalized on. I’ve got this pedal which sounds like a synthesizer, and it helped to write the opening riff of Big Ideas. It’s interesting how that kind of new equipment breeds new sounds and new ideas.

The record is of course more synth-based than the last one.
Andrew: Maybe, yeah. You get a lot of the synth pads, which is a similar texture to [older hit single] Diamonds. It was a really dominant texture in that song, but some of the guitar effects are so heavy that they don’t even sound like guitars anymore. You can easily mistake for synths then.

I would’ve asked if this was then a conscious approach from the start, having a record which sounded along these lines.
Nathan: We have a love affair with reverb as well, just because we really like the grandiose sound that it offers. It wasn’t a conscious thing, though. We all like the lush sounds of orchestration, even though we didn’t get an orchestra in. We had pads, keyboards and huge guitar sounds which were far more than just playing a few notes. It’s a whole soundscape.

Did you approach this record differently than your previous ones?
Nathan: Not particularly. We wrote this one in a similar way to the last one, but it was kind of writing the song and getting the basics together before going to town with it.

On the last record, Diamonds was a mega-hit. Do you think there’s anything on this one which might match the impact Diamonds had?
Nathan: I have no idea. I didn’t think much of how Diamonds would be. I thought it would hopefully be received well. It’s a really good song and I felt good about it, but at first I didn’t even think it would be a single. It’s kinda hard for me to say at this moment, but I’ll tell you in about a year.

Andrew: I think we’re also really trusting other people’s opinions as well. That’s an important thing, because I think that you have a strange relationship with your own songs. I associate, say, Weapon with all the excitement that I felt when we started writing that song, and now I can’t detach myself from that. I find it such an exciting song simply because of how excited I felt at the time. Now my perspective has changed, because we spent a year with it and I’m just preserving that original impression. It’s hard to judge, so all the people who’ll hear it haven’t had the relationship with it that I had. We have to kind of trust other people’s opinions on hearing it for the first time. To answer the question simply, though: Big Ideas. Big Ideas is one of two songs I just want to focus on in detail. The other one is Keep Me Close. Can you tell us the stories behind those two songs in particular?
Andrew: From a musical perspective, Big Ideas took a strange journey.

Nathan: It’s probably the oldest song on the album.

Andrew: I joined the band two years ago so I wasn’t on the other albums. I come from an acoustic background, so I think I was playing some acoustic thing in an open tuning. It was in a major key back then, too. It was one in a whole batch of songs, but we thought that there was definitely something in it. We were thinking of ideas to keep this song a bit more up-to-date with the rest of the album, so we were working towards our parts. One big change is that I got this new pedal. All of a sudden I was able to come up with a new riff, and then the constant kick drum took it to a new place. It no longer sounded like Mumford & Sons in any way, haha.

Nathan: It was more like Credence Clearwater Revival, haha.

Andrew: I remember trying this delayed pad sound, and then it became something different once we also put it in minor key. The key change was a big thing, because it’s a mixture of dark melancholic stuff and a “happier” chorus. (To Nathan) You’re the lyric man, so this is your bit.

Andrew: Got the job done, tick that one off.

Nathan: Big Ideas probably has my favourite verse. That might sound a bit stupid or arrogant, but I love it. It’s the second verse. I was cooped up in a car with my wife and our child, and for some reason I was thinking about lyrics. It kinda just came out of nowhere, that one. Originally we thought we were gonna record the album in March, but for whatever reason we ended up doing it in June. Which is great, though, because we finished off Big Ideas and a few other songs. We had basically half the album by June, so it would’ve been a very different record had we recorded it in March instead. Keep Me Close started with an Apple loop that I had done with bass and congas, which is what I brought in. That kinda came in when our bassist Adam (Harrison) added some groove. Then it started sounding more like Massive Attack to me. A poor man’s Massive Attack, maybe. I just remembered that Keep Me Close keeps the same chord pattern again and again, and it was trying to maintain that atmosphere throughout the whole song without it breaking you out of that feeling.

The artwork for Oceans by Oceans is very colourful and bright. Is there a very heavy visual emphasis on this record?
Nathan: There were some visual elements that came to mind, yeah.

Andrew: There were some songs which really triggered that. When we were writing Weapon, somebody mentioned that it reminded them of 1980s Art Deco from Miami.

Andrew: Yeah. Then the attractive side of things sat alongside the music nicely. When I hear the music I see those colours. Not like with Synthesesia, but it all just sat alongside each other nicely. I’ve grouped them together in my head to fit that purpose, perhaps. It just works really well, so we worked with an artist who was able to cater for those ideas that we had. He put the pictures together for the kinda thing we wanted. He came up with something that really represents the record visually.

Are you planning on incorporating any of it into the live show?
Andrew: Not right now, because musically it’s still quite dark and atmospheric.

Nathan: I don’t think it’ll all be fake sand and palm trees, haha.

Andrew: One idea I have which I kinda like is having the album artwork on my guitar. That would be pretty cool. I could mess up my guitar, though, which is a risk.

Nathan: Go for it man!

Andrew: Yeah don’t write that, it was silly.

Nathan: Put a print on the drum head, haha!

Well thanks a lot for your time, and good luck!

Ocean by Ocean is out next week Friday (29 April). Stream it here, via Apple Music.